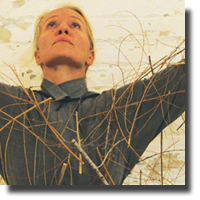 Louis Riel is a big figure in Canadian First Nations history, but his younger sister who was a Grey Nun has been overlooked. So in this 9th annual celebration of Louis Riel Day, the focus has been on Sara Riel. This new work choreographed by prolific dance and performance artist Robin Poitras and visual artist Edward Poitras and performed by Compaigni V'ni Dansi Artistic Director and master jigger Yvonne Chartrand explores the life of Sara Riel.

The first part of the programme was a poetic interpretation of the three-month journey of Sara from Manitoba to Saskatchewan to establish an orphanage there. Inspired by stories of Sara Riel, poet Tim Lilburn put together poems based on Sara's letters. Accompanied by Charlie Fox's sound effects which reflected the trek of Sara, with nature sounds and mosquitoes which invade the prairies in the summer, Chartrand danced to both the narration and the sounds.

I spoke to Robin Poitras during the reception and asked about the design, which had candles strewn all over the floor, and according to her, the church burned down twice and the red lighting effects expressed this. I also had the impression that the veil that Chartrand put all over her seemed like a nun's veil, but at the same time, gave me the impression of the statue of the Virgin Mary. Poitras commented that the veil was a practical piece of wear during the summer because of the mosquitoes.

The second part of the programme was a celebration of Metis dance by the Compaigni V’ni Dansi Louis Riel Métis dancers led by master jigger Madelaine McCallum, and three other dancers: M. Pyress Flame, Eloi Homer and Hailey McCloskey. They provided the the energy and heart which got the audience going. It's curious how "metis" means half and half which is exactly what this First Nation is all about: the mixture of Caucasian from the French and Irish, and native peoples. In fact, many look more Caucasian than native, and in these dances, we see the jig which is very Irish or French and then, half-way through, the drums start, to show the native part of the dance.

The Louis Riel Métis Dancers were accompanied by the music of Shaganappi, featuring Keith Hill on fiddle and Amy Eustergerling on keyboard. with their traditional Métis jigging. Hosted by award-winning filmmaker, writer and teacher, Greg Coyes, and produced by Amy Wertz, the evening program was an entertaining one, and got the audience not only clapping and stomping away, but also dancing to the waltzy tunes of Keith and Amy.