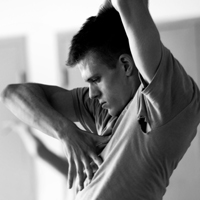 Ballet BC opened its 2017/18 season November 2nd at the Queen Elizabeth Theatre. The Company, fresh from touring in California and New York were primed and ready to showcase their talent with Program 1, which includes two pieces entitled Eight Years of Silence and B.R.I.S.A.

Eight Years of Silence, choreographed by Cayetano Soto, resident choreographer for Ballet BC is the embodiment of a very personal journey for Soto. Fears, Soto states, “sculpt your soul.” The piece, does indeed, have sculptural elements to it. The toned limbs of the dancers, clothed in tightly fitting body suits, seem to represent the tension of fear. The lighting teases the limbs of the dancers, suggesting a tempting release from the grip of fear. Soto states that one has to work to overcome the fear that we all feel at one time or another in life. To that end, Eight Years of Silence is very demanding on the dancers. It requires controlled precise movement within the exacting choreography. All of the individual elements that have contributed to this work create the controlled tension that is the embodiment of fear. Soto has experimented with an emotion, revealing it through dance. The black outs of light and the music by Peter Gregson further enhance the impact of Eight Years of Silence. Danced by Brandon Alley, Emily Chessa, Parker Finley, Alexis Fletcher, Scott Fowler, Kiera Hill, Patrick Kilbane, Racheal Prince, Justin Rapaport, Peter Smida, Christoph von Riedemann, Nicole Ward and Kirsten Wicklund it was breathtaking to watch and resonated strongly with the audience.

B.R.I.S.A., the second offering on the program is choreographed by Johan Inger. It takes its name from the Spanish word “brisa” which means wind. The inspiration around the piece comes from concepts of change and awakenings, how one affects the other. It is a work that starts out in a controlled fashion and slowly evolves into full on fun. Inger takes the audience on a voyage of exploration of the human psyche. It is the perfect pairing to the first half of the program. The dancers are amazing, especially in the wind sequences, which they mime brilliantly. Dancing in a set designed by Inger and lit by Tom Visser Brandon Alley, Emily Chessa, Alexis Fletcher, Scott Fowler, Peter Smida, Christoph von Riedemann, Nicole Ward and Kirsten Wicklund act out the consequences of change. The music, performed by Nina Simone, was composed by Gian Carlo Menotti (Black Swan), Ned Washington and Dimitri Tiomkin (Wild is the Wind) and Sinnerman, a traditional song was adapted by Nina Simone. The evening was an exhilarating collaboration that foreshadows a successful 2017/18 season for Ballet BC.