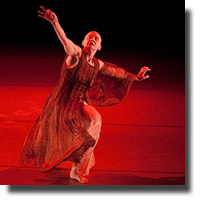 A one-hour distillation of a life spent in dance, this solo performance by Barbara Bourget is woven through with personal relationships between the dancer and her collaborators: inspired by the poetry of Elizabeth Dancoes, and accompanied on grand piano by Bourget’s son Joseph Hirabayashi, playing an original composition. A standing ovation at the end of her performance!

In past performances, fully nude dancers clad in white makeup were performed by the troupe in Wreck Beach. This time, at the end of her performance, she bares only her breasts as Bourget recites Dancoes's poem "I am moved into the unknown".

This was an inspiring performance by this dancer, a grandmother in her sixties, as she combines classical and modern dance in her one-hour show.

Bourget is co-founder since 1986 with her husband Jay Hirabayashi of Kokoro, and she is an accomplished dancer who has performed over 1,000 performances in her lifetime. She has choreographed for EDAM when she served as artistic director from 1981 to 1986. She has taught dance since 1975 for the Burnaby Arts Centre, Main Dance Place,, Goh Ballet, Karen Jamieson Dance Company, Ballet BC and others. She is a truly accomplished and respected dancer, teacher and choreographer.