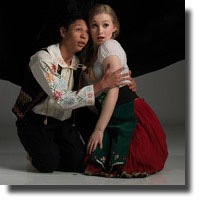 Coastal City Ballet’s premiere of Hansel and Gretel received a warm standing ovation at the Centennial Theatre last May 6th. Although CCB is a pre-professional company, the dancers had the professional touch in their delivery of this Grimm classic.

French choreographer Irene Schneider brought a playful and charming spirit to the Grimm's storybook classic. The matinee performance was almost a full house with children of all ages, from four to 84. Most of the children were even dressed up in ballerina costumes, most probably students of ballet. CCB’s production which lasted almost an hour and a half featured an imaginative set by Christian Baumgartel, fantastical costumes by Nuschin Rabet, creative lighting design by Blaine Rittinger and beautiful music of Engelbert Humperdinck from the celebrated opera.

This is the third ballet company in the Lower Mainland, the other two being the professional companies Ballet BC and Goh Ballet. I hope eventually this pre-professional company becomes professional, and I look forward to seeing more productions directed towards the youth, such as this one and perhaps later on, Disney classics like Beauty and the Beast and Cinderella. That way, BC can develop a core of young dancers inspired by ballets for children who may eventually join the company of other international dancers.

Kudos to Artistic Director Li Yaming, Company Director Andrea Allen, the Artistic Staff, and all the dancers for the success of this production.