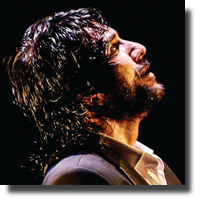 Last November 8th, the highlight of Vancouver International Flamenco's 24th festival was Joaquin Grilo performing at the Playhouse with singer Jose Valencia and guitarist Juan Requena. The standing ovation at the end of the show in this jam-packed performance was a sign that the $60 ticket to see the 90-minute show was worth it. To boot, Grilo even got his wife, Nuria Figuera, to dance in the encore number.

Despite a bit of paunch showing from a man in his forties, he still thrilled the audience, especially the senoritas who were screaming in the theatre. If he'd cut down on his paella and sangria, he'd probably have more senoritas and senoras screaming. I enjoyed most his dance where he mimicked a bird and did his own creative flying and tippy tappy dancing. I was wondering whether this was where tap dancing originated.

With regard to singer Valencia, I'd say he looked the typical gitano, a somewhat mix of Hindu and Arab. The songs were full of emotion as he did his solos, but incomprehensible to the ear. I picked up a few words here and there, but all in all it was hard to understand the Andalusian jargon.

The guitarist Requena, a young bearded man, lacked emotion as he played. The strummingwas simple but precise, but if he only had the sweaty emotion of Grilo, playing with more passion, that would have gotten the audience roaring more.

It was an entertaining show, especially with Grilo giving his all, changing a number of times because he was bathing in sweat for every piece he danced to. His style is a deviation from the classical Flamenco. He does bumps and moves his hips like contemporary dance, but this mix is acceptable in our days where eclecticism seems to be the trend.

Grilo is in town until the 11th for workshops. So those who missed the show should take advantage of this and go seek this charismatic dancer at Centro Flamenco.