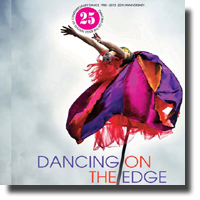 The 25th Annual Dancing on the Edge Festival got off to a spectacular start with even the weather cooperating. About thirty or so dance enthusiasts followed Vancouver’s Carnival Band from the Firehall Arts Centre to Portside Park at Main and Waterfront for Dusk Dances, a free magical sampling of dance vignettes.

After half an hour of cheerful (and noisy) Mardi Gras style music from the Band, Tara Cheyenne Friedenberg, dressed up in a top hat, tails, spats and little else, took over as a convivial Master of Ceremonies.

The first of four interesting works was May I join you? An unlikely mix of jazz and flamenco performed by dancer Carmen Romero and pianist Scott Metcalfe. Then onto another grassy patch for Watermark: lost at sea choreographed by Eury Chang. Part theatre, part dance that incorporate text from Samuel Taylor Coleridge’s The Rhyme of the Ancient Mariner read by Capt. George Vancouver (David Geary). A mysterious dancing siren (Janice Valdez) enchants a pair of sailors.

Onward Ho, my love is a duet performed by Yvonne Ng and Brendan Wyatt on a slippery plastic runway. The pair displayed incredible athleticism in a work that was at times tender, other times wanton. The final work was Incandescent choreographed by Kate Franklin and Meredith Thompson. Two dozen dancers perform to the music of The Flaming Lips.

Later, back at the Firehall, aboriginal choreographer Lara Kramer’s autobiographical of good moral character was performed by Maria Simone and Lael Stellick. The two dancers explore the good as well as the very bad aspects of domestic life.

Simone and Stellick use every square foot of the stage floor, throwing themselves at each other one moment and showing rank indifference the next as they examine the strengths and frailties of the human spirit. In Kramer’s vital vocabulary, the dancers depict such extreme ends of a relationship as intimacy and alienation while articulating sensuality and vulnerability. In one particular sequence Maria Simone is naked inside an overturned bathtub exposed by a beam of light with the stage in darkness.

At twenty-five years, Dancing on the Edge is the longest running contemporary dance festival in Canada. It runs every day until July 13 offering works by some of the country’s best choreographer’s