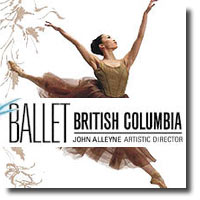 The Four Seasons plus A Garden

The world premiere of John Alleyne's choreography of Vivaldi's Four Seasons received a warm welcome by a full house audience during opening night. In his programme message, Barbados-born Alleyne says that his interpretation attempts to spontaneously transform "movement into line and color. The narrative is driven by the music and the relentless passing of time from youth through maturity."

These words sounded vague to me at first, but when I started recalling my teenage years in the 60s, I started to understand. First, he refers to transforming the ballet movements into "line and color." What I saw, true enough, was a colourful array of costumes, in the style of the 60s. In an interview with The Georgia Straight, which featured Ballet BC in its current front cover, Alleyne said that this was the era of his childhood, the most revolutionary decade of the 20th century with the flowing tunics of Twiggy-style dresses and men's ruffled shirts and mod suits.

The concept of spontaneity was also a feature of this period. There were expressionistic painters like Jackson Pollock who would splatter and pour paint all over his canvases, and in theatre, improvisation was the thing of the day with theatrical events called "happenings" sprouting in university campuses and in streets. So, the whole idea of spontaneity and freedom of expression was what Alleyne was driving at in his interpretation, seeded in an era that blossomed later in the 70s into the flower children.

The other two programs, which preceded Four Seasons was A Garden, the Canadian premiere of a ballet choreographed by Mark Morris, and a/way inside by Dominique Dumais performed beautifully by Alexis Fletcher and Edmond Kilpatrick. Kilpatrick is retiring from Ballet BC after nine successful years with the company.

The collaboration of Vancouver visual artists Tito Kerr and Alan Storey incorporating their participation in the Alleyne's choreography appeared distracting at first. Kerr would be painting live on one corner of the stage while the dancers were doing their en pointe; then, Storey's giant drawing machine hanging from the stage, digitally tracking dancer Makaila Wallace's movements, was quite innovative, but we had our focus going from one artistic expression to another. But if we consider the 60s metaphor that Alleyne wanted to express in his choreography, I think the inclusion of these was justifiable.

One segment of Alleyne's ballet was a dance by the youth corps from Arts Umbrella which, in my opinion, was the best part of the choreography. The live performance by members of the Vancouver Opera Orchestra, conducted by David Lamarche with soloist Mark Ferris, delivered Vivaldi's score with precision.