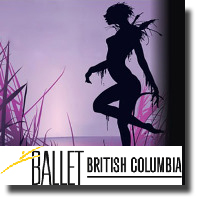 The Ballet BC performance of Faerie Queen, choreographed by BBC artistic director, John Alleyne who is renowned for creativity and experimentation in the modern dance world., was an unusual and interesting leap of dance fantasy.

His rise has been steady and impressive and led to many awards such as the 1992 Dora Mavor Moore Award for Outstanding New Choreography for his work with Interrogating Slam. In 2004, he received the Vancouver Arts Award. Among his many pieces are: The Don Juan Variations (1995), Boy Wonder (1997),
Carmina Burana (2004) and The Four Seasons (2008).

Faerie Queen is a story about enchantment and sensuality. The staging, thanks to Darren Waterston, was highly visual and evoked the mood of enchantment and myth that Alleyne endeavored to show in his work. The dancers, particularly Donald Sales, in his last role with Ballet BC, were suitable to their parts and danced with expression.

Simone Orlando was elegant and moved with grace. Orlando is one of the veterans of Ballet BC and a powerful performer. Born in Vancouver, she has been dancing professionally since 1989, first with the National Ballet of Canada and later with Ballet BC. Orlando has received two research grants from the British Columbia Arts Council and is the recipient of the Clifford E. Lee Choreography Award in 2006 for the piece, Winter Journey.

The costuming for Faerie Queen, always an essential element of successful performance, was created by Kim Nielsen. The musical score, composed by Michael Bushnell and Owen Underhill, was excellent and achieved a perfect blend of sound and mood.

Ballet creates a story and draws upon a blend of artistic talents: from dancer, choreographer, musician, costume designer, set designer to do so with beauty and distinction. In the Faerie Queen, Ballet BC and John Alleyne have accomplished this artistic blend with élan.