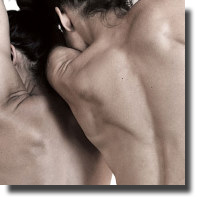 In what is recognised as one of this community arts centre’s most conspicuous events, the audience witnessed the announcement of the winner for the $60,000 Rio Tinto Alcan Performing Arts Award for 2013 and a compelling performance of the current recipient, Les Productions Figlio for Serge Bennathan’s dance work Elles.

Rio Tinto Alcan’s director of government relations, Richard Prokopanko awarded the prestigious prize to Theatre Conspiracy for the company’s new work, Extraction, that will have its premiere at The Cultch next Spring. Extraction is a socio-political documentary theatre piece performed in both English and Mandarin.

The first order of things was a public premiere performance of Serge Bennathan’s Elles. He evidently got much of his inspiration from the fierce, female spirits who seek vengeance on the suitors who betrayed them by dancing them to their death in Coralli and Perrot’s ballet Giselle.

Bennathan’s choreography is essentially non-linear, with his dance syntax often appearing random and esoteric. The dense vocabulary however, demands decisive physical movement and artistic sensitivity creating a sensuous choreographic framework. An octet of female dancers, collectively on stage for the entire sixty-minute performance, generally similar in size and appearance are obviously less similar in expressive nuances and athletic prowess - a deliberate element in Bennathan’s central motif of unity actualized by a divergent corps.

The energy and vibe of all the dancers was manifest in both the combined movements in loose unison and individual expression in a work which crosses the lines of classic ballet, martial arts, burlesque and jazz improvisation.