The 22nd Annual Dancing on the Edge Festival

Innovative dance at innovative sites with dancers always taking their art to the edge is again this year's festivalhosting 20 different performances over the 11 day festival, and featuring new site specific work, a number of Canadian premieres, a new choreographic commission, along with dance talks and festival events in and around the Firehall Arts Centre neighborhood. Different reviewers take a look at some of these performances. 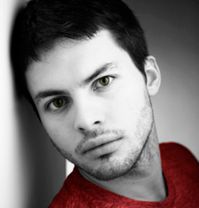 Friday's performance demonstrated that this little dance company takes its craft very seriously. Each dancer is not only highly skilled in contemporary dance but also in elements of ballet, gymnastics, theatrics and comedy. These elements come together to provide fascinating entertainment.

The evening began with a solo performance entitled Miss Independent. A combination of mechanical movements fused with traditional ballet achieved an effect that was compelling. The subsequent numbers were equally captivating and proved that there is no 'one' dancer's body type. As most ballet dancers are within a fairly rigid height and weight range, these contemporary dancers prove that size doesn't matter.

Colours in costumes and lighting were brilliantly incorporated into the dance numbers and provided a rich visual effect that enhanced each performance. The musical accompaniment was taken from renditions of
the rock group No Doubt's greatest hits and served to set the tone of this contemporary dance rock concert.

Dance numbers were a varied combination of solos, pas de deux, pas de trois and groups of various numbers. Dialogue that included announcements to the audience, props from oranges to buckets of water, all served to create a fast paced, yet somewhat startling experience.

Josh Beamish is undeniably an exceptional dancer as well as artistic director. He brings pure visceral physicality to the dance performances and incorporates the traditional with the contemporary with an expertise that is impressive. It is not surprising to find that Move: The Company will take part in Miami's International Ballet Festival, the Quinzena de Danca Festival in Portugal, and Expo in Shanghai later this year. Congratulations! July 9 & 10. Vancouver Playhouse 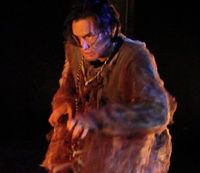 Byron Chief-Moon is the Coyote in this Coyote Arts Percussive Performance Association presentation of Ihtsi-pai-tapi-yopa: Essence of Life. Subtitled Explorations of a Tribal Paradigm  this Sun-dance ceremony of the Blackfoot people gives us an insight to the daily rituals of this first world nation. Three performers , one dressed as a coyote (Byron Chief-Moon), and the other two as blackbirds (Sheldon Blue-Hawk and Duane Howard).

The performance was meditative in the sense that one could feel subliminal emotions as the dancers performed their rituals t hrough song and dance. At times, the percussive music would take he audience into a trance, then it stops suddenly, as the backdrop shows us blackbirds flying in the sky, or a buffalo in rage, running, as the sound of a train whistles by. Then we see the blackbirds dancing to the hip-hop and sometimes disco music.

In the programme notes, Byron Chief-Moon explains the inerdisciplinary approach to this dance--traditional and ritualistic, combined with the contemporary modes of today's music: "Our current inter-disciplinary dance/media project is closely translated as Essence of life, echoing the root inspiration of the Blood-Kainai tribe through the intimate details of landscape.  To the tribe there is an appreciation that as long as there is honour for Mother-earth as a living soul then there is a choice, as her children, to continue to hear her stories and evolve towards becoming earth-human, for a better tribal-community, and meditations, of and on the tribal lands, reflecting a choice of freedoms which are communicated in daily activities"

For Blackfoot tribes, just as the African tribes, or the ancient tribes of Asia, there is no dichotomy between the spiritual and the material as is the case in Western Civilization and religions. Rather, the relationship is, as Byron Chief-Moon so succinctly put it, "between the natural world as conscious-earth and the conscious earth-human".

In tribal religions, it is Mother Earth that is the prime mover, and she is explored through the animals, elements, and spirits of the land.  This experience of watching this performance was indeed owerful, providing the audience with an immense connection and understanding of the cosmic relationship to Mother-earth. And again, in Byron Chief-Moon's words, "For the Blood-Kainai tribe, this is Ihtsi-pai-tapi-yopa: Essence of Life".July 8 & 10. Firehall Arts Centre.