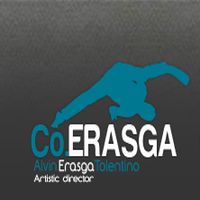 Colonial, the new work by talented modern dance artist Alvin Tolentino is an ethereal, moody exhibition into the world of nature through the expression of dance. The set was stark and moody - a backdrop in green and grey of jungle leaves. The music featured riveting chanting that had a primal tone.

This is a work that can be hailed as a primal venture into the world of movement. Tolentino is masterful at creating a new world in which to explore his thematic art. The opening scenes with Tolentino naked behind a screen that was lit from underneath, immediately drew the audience into the world of emotion and imagination. One feels transported into the jungle and into a world of primordial movement.

The goal of any artist is to transport the audience into new worlds of thought, experience and emotion. Tolentino achieved this goal with stunning effect.

In the second piece, Tolentino was dressed in a tribal costume, like a shaman, and carried two large straw pom poms that were whisked through the air repeatedly. The movement was emotional and moody. His movement was enchanting and almost hypnotic and kept the audience in rapt attention.

Tolentino has a gift for expressing emotion through movement which is the pinnacle of attainment for a dance artist. He is the artistic director of Co. ERASGA, which has been presenting innovative modern dance, works in North America, Europe and Asia for over a decade.

What is unique about Tolentino is his ability to push dance boundaries with fresh, new dance movement. He is unconventional yet expressive and therein lies his strength.