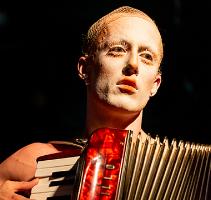 Leonard Cohen died on November 7, 2016 in Los Angeles at age 82. Right off the bat, I confess to being a Leonard Cohen fan. There are few of his songs that I cannot identify with. Apparently the same is true for his namesake, choreographer Idan Cohen. Cohen, the one that is very much alive, is the founder and artistic director of Ne.Sans Opera & Dance who have recently brought to the stage Take This Waltz. It’s a unique music production that incorporates dance, live music, vocal arrangements and ten songs – nine of which composed by Leonard Cohen.

The show sets the theme appropriately with one of Leonard’s most cynical songs, Everybody Knows. A lone singer (Daniel Okulitch) sits on a wooden in a harshly lit room with a briefcase in hand. The location might be anywhere – a clinic, a hospital or even a bus station. Midway through the five-minute song, three musicians appear at the back of the stage in half light.

Show me the Place is an unusual collaboration Patrick Raymond Leonard. The tune has an almost hymn-like quality. A dancer (Ted Littlemore) carrying a small table on his back rotates in slow motion with the table pivoting on one of the legs. The music and Littlemore’s dance vocabulary extend seamlessly into the next song, Treaty with the singer participating in the precise choreography. Dancer and singer share the contents of the briefcase – a bottle of wine and two glasses.

Dance me to the End of Love is structured in the form of a Greek folk dance. The singer simply listens to a music box playing the tune while the bare-foot dancer executes meticulously detailed movement. Littlemore brings a separate and distinct dimension to the production.

In One of us Cannot be Wrong and Take This Waltz the dancer and singer share in the dance syntax in a doctor-patient dance arrangement. In the final Leonard Cohen song Hallelujah (Hebrew-halelu yah) The song seems perfect for the singer’s baritone voice and although Okulitchis a trained opera singer, he has a similar timbre to the composer. Littlemore joins the music ensemble on-stage playing the accordion while dancing.

In what seemed an encore, rather than the finale of the regular program, Russian-born French singer-songwriter’s anti-fascist anthem The Partisan certainly qualified to be in a Leonard Cohen tribute show. He recorded the song on his 1969 album “Songs from a Room,” fueling a misconception that he actually wrote it.

This of course is not the first time that Leonard Cohen’s music has been used in theatre. Chelsea Hotel was so popular in Vancouver that it circled back three times over a number of years. But Ne.Sans Opera & Dance’s is definitely sui generis.