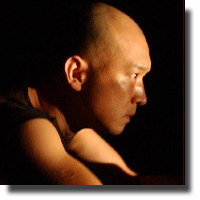 We were treated to an afternoon of music and dance from Brazil, Spain and China. Silk Road, an award-winning ensemble founded in Vancouver in 1991, accompanied dancers Wen Wei, Andrea Monteiro and Michelle Harding as they delivered dances from three continents.

In this programme, Silk Road conjures dances from Europe, America and Asia. Wen Wei dances the traditional Chinese dances with touches of contemporary Western dance. His first dance is reminiscent of Kung Fu movements, and then later on, in his second dance, he waves red banners, dazzling the audience wih his skillful prowess.

Michelle Harding gives us the Flamenco from Southern Spain, with her her black bolero expressing the Lorcan canto jondo. Then in her next dance, with a Manila Mantilla, dances the dance of a gypsy woman abandoned by her lover who escapes the wrath of her husband and her gypsy clan as he runs away to join the French Foreign Legion.

Seductress Andrea Monteiro gives us a taste of Brazil, shaking her body, turning and twisting almost like Tahitian dancers, in her gold headdress and green-feathered Rio Carnavale costume, getting the audience to participate in a joyful Mardi Gras dance.

This was an interesting one and a half hour dance show. Going into its 14th season, Dance Allsorts is New Works' signature performance and workshop series. Each month from September to May, dance artists give monthly workshops on new forms of dance on a Saturday and then perform the next day, on the Sunday.In her opening remarks, Executive Director Joyce Rosario was happy that despite cutbacks in funding to the arts, the company continues receiving funds for its projects.