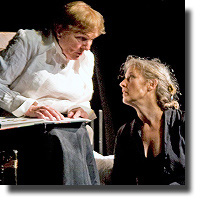 The stage of Bulletins from Immortality…freeing Emily Dickinson was minimal, with only one chair and the five boxes that created several tables. This stage design echoes the poet’s small physical world because Emily Dickinson lived most of her life as a recluse in her family’s home. In fact, before her death, Dickinson retreated even further, by remaining in her bedroom and speaking to people only through its closed door.

Margie Gillis said, “Emily Dickinson lived a very demure life, but inside of her was a huge life. The rhythm and passion of her poetry is so exquisite.” So it is this profound admiration that is the basis of Margie Gillis, the iconic Canadian dancer, teaming with actress Elizabeth Parrish, to read and physically interpret the spirit of Dickinson’s poetry.

As the two women enter onto the stage in silence, they are holding hands, and seem at first to be perhaps friends, sisters, or a mother and daughter. But, really, they are the same person, the two sides of Dickinson: the spare words and the large emotion.

Then quiet piano music is heard. Gillis lifts the black book of Dickinson’s poems above her head, lowers it and rocks it like a baby, and eventually opens it up, snapping at the air, as if letting the words fly away, while Parrish reads, “The brain is wider than the sky.”

Often the set is so quiet after Parrish has read a few lines of poetry, that the audience can hear the sound of Gillis’s feet swishing on the hardwood floor. When Parrish reads, “…the pedigree of honey does not concern the bee,” Gillis flutters a handkerchief in her hand to mimic the bees flying off. And how does a dancer interpret the punctuation of a poem? Parrish finishes reciting:
I reason, Earth is short-
And Anguish-absolute-
And many hurt,
But, what of that?

In response to the stanza, Gillis, in her flowing black dress, becomes a bird flapping her wings, and all of the dashes create a rhythmic emphasis. Yes, Gillis certainly knows how to dance the dash!

At the end of this performance, the two collaborators turn to bow to each other, before they look down at the black book of poetry on the floor and together give a deep bow to the incomparable spirit of Emily Dickinson.