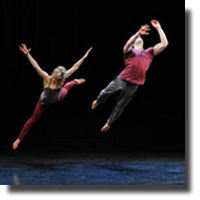 The Scotiabank Dance Centre showcased 4 works last night which were the combined effort of several up and coming local choreographers.

12 Minutes Max is an opportunity for those in the process of studying and learning their craft to be able to perform for a live audience in a professional theatre.

The evening began with Francesca Frewer and Erika Mitsuhashi performing Our Gestures Are No Longer Ours which was choreographed by Natalie Tin Yin Gan and Francesca Frewer. This work seemed to be exploring the relationship between form and movement through the use of the parallel shapes the dancers’ bodies relaxed into. The dancers played with the concept of engaging the audience with the use of facial movement and physical interaction.

The second piece, entitled, Veiled was choreographed and performed by MAYCE: Robert Azevedo, Antonio Somera and Marisa Gold in collaboration with Janelle Reid. The works shown tonight personify ideas that the artists are wanting to convey through movement. They are explorative and experimental in nature allowing the artists a freedom to develop their craft. Veiled is an energetic piece which went into the audience to explore the interaction of artist and audience through an aggressive approach.

here or there was choreographed by Caitlin Griffin in collaboration with Delphine Leroux. Delphine performed this solo using chairs as a prop for her movement. The piece used the absence of light to delineate the dancer’s change of position on stage and also experimented with the static object of a chair interacting with the litheness of the human body. The contrast added some tension to the piece.

The evening was billed as offering 5 twelve minute performances but unfortunately, due to an injury, Naomi Brand’s Re:play could not be performed.