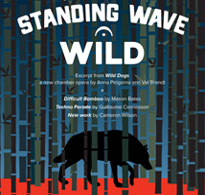 Avant-garde chamber ensemble Standing Wave concluded their 2016-2017 season with a selection of cutting edge works by young composers under the collective title WILD. The showpiece of the concert is an excerpt from Anna Pidgorna’s one-act chamber opera currently still in progress. Based on author Helen Humphreys’ fictional work of the same name, Wild Dogs has its protagonist, a simple-minded young girl named Lily, who gathers with strangers at the edge of the woods to call their dogs that have joined a feral pack. Lily then naively enters the area alone in search of her canine companion.

The talented sextet not only played their respective instruments at a high level of performance, but also impersonated the croaking of frogs and the barking of dogs. Guest soprano Carla Huhtanen takes on the role of Lily through Val Brandt’s libretto with mesmerizing effect. Ms. Pidgorna’s music might be considered esoteric for universal taste, but it is certainly compelling!

The concert actually kicked off with Allen Stiles on piano, Anne-Katherine Coope on clarinet and Christie Reside on flute coming together for Guillaume Connesson’s Techno Parade. The work is identified by a constant rhythm that goes right through the piece.

Next, the curiously titled Difficult Bamboo by Mason Bates. This very imaginative pastoral piece evokes a conflict between humans and nature with nature winning hands down. Despite the repetious motifs, it delivers complex rhythms and a succinct energy that elicits the rapacious nature of bamboo.

On one level, one must suppose that composer Cameron Wilson has to enjoy listening to pop music. On the other hand, one might also assume that he just has a cynical sense of humour. Louie, Louie Variations is hardly recognizable from the Kingsmen version of the Richard Perry song that almost every artist has covered. His “eccentric variations” are certainly less esoteric than other pieces in the repertoire. If the melody is not evident, the musical styles surely are. My personal favourite is the ‘variation’ that has elements of ragtime featuring Anne-Katherine Coope’s bass clarinet and Allen Stiles’ honky-tonk piano.