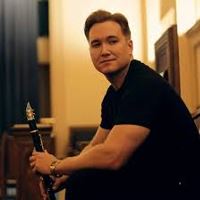 From big band swing to good ol’ rock ‘n’ roll - featured performers Dave Bennett & his Quartet joined Maestro Michael Krajewski and the Vancouver Symphony Orchestra on the Orpheum stage for a multi-genre repertoire. Audience members might have expected to see five musicians on stage with the orchestra. However, Jeff Kressler on piano, Shelly Berger on bass and Pete Siers on drums only form a trio of excellent side musicians behind leader Dave Bennett. Therefore, the combo might be more accurately described as The Dave Bennett Quartet.

Bennett, his band and the orchestra worked through the selection of tunes in more or less chronological order, kick-starting the concert with a Glenn Miller tune “Little Brown Jug” and Benny Goodman’s iconic “Bugle Call Rag.” Staying with tunes from the Swing era, the virtuoso clarinetist moved into a quick tempo medley, book-ended by “Darktown Strutters Ball” and “Avalon.”

Next, Bennett paid homage to the late Pete Fountain, the Dixieland jazz clarinet player, with a fluid interpretation of “Just a Closer Walk with thee.” Bennett picked up a guitar with his combo shifting gears and time frame for another tribute, this time for Elvis Presley. “Heartbreak Hotel,” “Blue Suede Shoes” and “Can’t Help Falling in Love” were performed in rapid succession. Bennett ended the set with a re-worked gospel tune from his recent recording “How Great Thou Art.”

By the time the musicians returned the second set, the auditorium seemed oddly depleted. Those who had parties to attend missed out on a musical treat. Bennett and his clarinet got things moving with a couple of original tunes: the very up tempo “13 Fingers” and the combo’s first public performance of the atmospheric, jazz inflected “Blood Moon.” The multi-instrumentalist went to his guitar again to accompany himself singing a song he wrote when only seventeen. “Lonesome Highway” is a melancholy song that feels like it could have been recorded by Elvis Presley.

In a concert subtitled Whole Lotta Shakin': From Swing to Rock one would naturally expect to hear that iconic Jerry Lee Lewis song performed. The orchestra took a time-out when Bennett replaced Jeff Kressler on piano for an electric interpretation of The Killer’s “Great Balls of Fire" and Whole Lotta Shakin'.” Lewis, now 83 and apparently still performing the odd gig, would almost certainly have approved of Bennett’s piano playing a la Jerry Lee.

The concert ended with the consummate musician joining Pete Siers in a showboating drum duet with “As the Saints go Marching in” – the audience lapped it up.