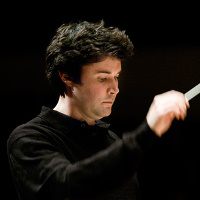 The Vancouver Symphony Orchestra
A Symphonic Tribute to Prince

American singer, songwriter and virtuoso guitarist Prince Rogers Nelson, better known simply as Prince, died of an accidental drug overdose at his home in Minnesota a year and a half ago. He was only 57.

Last night (December 4) the ninety-year-old Orpheum Theatre gave way to the aura of an arena rock concert with its stage backlit in vivid purple in deference to the colour broadly associated with “the artist (formerly) known as Prince.”

Mackenzie Green, who took care of the vocals, seems to possess much of the charisma and swagger of the late artist. Owning a wild afro and decked out in a black suit and an open throat purple shirt, he rarely stands still, regularly prancing and dancing across the stage. Andrew Gouché who was Prince's last bassist to play with Prince before his passing, took his place at the front.

Aubrey Richmond was named in the programme as the violinist, but it was Bonnie Brooksbank who Mackenzie Green introduced to the audience. Ms. Brooksbank carried an electric violin onto the stage, but her primary function was Green’s back-up singer.

Green got the evening off to a rousing start with the appropriately titled “Let's Go Crazy.” The singer maintained the spirited opening, following up with two of Prince’s most influential songs: “When Doves Cry” and “Little Red Corvette.”

Green appears to be gifted with a similar vocal range as Prince - G1 as his lowest note, up to a falsetto-like C7 – evident in performing the sensuous “Delirious,” a song that demands an extensive range. He occasionally punctuates the music with short panegyrics, but without ever announcing song titles.

Green, Brooksbank and all the musicians closed out the first set with a high-energy rendition of “Raspberry Beret” – ensuring that everyone would be back to take their seat after the intermission.

In the second set the “hits” just kept on coming: “Party like it’s 1999,” “Diamonds and Pearls” and “Kiss” featuring Green’s falsetto. Perhaps predictably, the concert ended with “Purple Rain,” a song generally regarded as Prince's Chef-d'œuvre.

Notwithstanding that the concert was advertised as A Symphonic Tribute, there was much less symphonic content than rock. Maestro Rowson (despite accolades from the featured vocalist) didn’t always look comfortable standing with his back to the guest rhythm musicians. However, the Orchestra’s brass section certainly added heft to the arrangements.