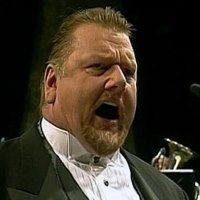 The Vancouver Symphony Orchestra took the opportunity in this season ending festival style concert to give themselves a well-deserved pat on the back. The program offered an expansive selection of music, some well-known and some never heard before. Host Ben Heppner took the audience down Memory Lane with a light-hearted conspectus of the orchestra’s hundred year history. There was also a multi-media presentation that included video footage of memorable performances at special venues, on television and in the movies.

Any concert celebrating longevity should begin with a fanfare, and it was Frederick Schipitzky’s bold Aurora Fanfare that set a convivial tone this night. The title is taken from the orchestra’s connection with the Northern Lights. Maestro Otto Tausk didn’t have to worry about finding the right tempo, Mr. Schipitzky was right there in his usual place in the bass section.

Frequent attendees to the VSO’s Tea & Trumpet series would be familiar with Edvard Grieg’s incidental music for Henrik Ibsen's play Peer Gynt. Maestro Tausk led the orchestra in a forceful reading of the Peer Gynt Prelude and In the Hall of the Mountain King.

Former VSO resident conductor Leonard Bernstein wrote the score for On the Town during the Second World War. Like much of Bernstein’s show music it has a distinct jazz inflection and is especially evocative of end of war New York, that vertical city that he knows so well.

James Ehnes and Lucy Wang came together on stage in an evenly balanced, sensitively played and thoroughly rewarding interpretation of the lyrical Largo ma non tanto, the second movement of Johann Sebastian Bach’s Concerto for Two Violins in D minor.

James Ehnes on violin and Tate Zawadiuk on cello joined the orchestra to perform a vivid and engaging rendition of Antonín Dvorák Slavonic Dance No. 2. The soloists gave Dvorák’s masterpiece a definitive enigmatic quality.

Jocelyn Morlock’s Strange Loop is the anomaly as the only music in the program composed in the orchestra’s second century. It’s a pleasing short linear work featuring interesting tuba passages.

James Ehnes joins the orchestra for the third time; this time to play all three movements of Tchaikovsky’s famous Violin Concerto. Both the soloist and the orchestra defied expectations, illuminating this classic as if we were hearing it for the first time. Although, I have to say that the relative slow tempo of the allegro moderato tends to be quite emphatic, almost protuberant, that even the audience assumed the end with premature applause.

This concert was a wonderful way of drawing a line under a milestone year. We can surely all be optimistic about VSO101.