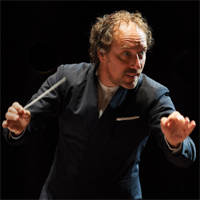 Contrary to popular perception, Also sprach Zarathustra was not composed primarily for Stanley Kubrick’s film 2001: A Space Odyssey. After all, Richard Strauss died of kidney failure twenty years before the epic film was released and it was only the opening fanfare, Sunrise, that was used during the opening credits. The real inspiration of the Viennese composer’s free-form symphonic piece is Fredrick Nietzsche’s set of allegorical parables.

The piece really begins when the trumpets enter in unison, playing the iconic fanfare that evokes such a sense of vastness. The following eight sections are played almost without pause. Strauss’ slightly chaotic, densely layered score continues with the dark Of those in Backwaters that contrasts with the full orchestral weight of The Great Longing. Maestro Otto Tausk’s fondness of the music inspires an esprit de corps with his musicians in the final two sections: The Dance Song (actually, a waltz) and the climatic Song of the Night Wanderer.

The evening started, perhaps appropriately, with an overture. When an orchestra decides to include Franz Schubert’s Rosamunde Overture, they have two to choose from: Alfonso und Estrella and The Magic Harp. On this occasion, Tausk preferred the latter. I’m happy that he did. The ten-minute piece is more pleasant and played at a livelier tempo; although, there was no harp played – magic or otherwise.

Dutch composer Michel van der Aa’s oddly titled akin for solo violin, solo cello and orchestra had its first ever public performance less than a month ago (May 9), It’s therefore likely that the Friday night attendees were only the second audience to hear it. Akin begins with the delicate plucking of the harp that introduces concertmaster Nicholas Wright’s violin and guest Pieter Wispelway’s cello before the eventual involvement of the entire orchestra. Wispelway, a native of Haarlem, (Netherlands) was a late replacement for Harriet Krijgh. He is renowned for his interpretations of both baroque and modern cello works. Van der Aa’s double concerto is an ultra contemporary work featuring an interesting musical conversation between Messrs Wright and Wispelway who play the solo passages with zest and verve in contrappunto form, though rather lacking in linearity.

The program in this final concert of the VSO’s 100th season was intended to represent the Past, Present, and Future. Schubert’s Rosamunde overture symbolizes the past, Strauss's Also Sprach Zarathustra signifies the present and van der Aa's akin would naturally proclaim the future.