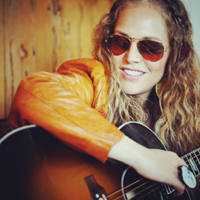 Frequent VSO guest conductor Jeff Tyzik this time brings his own creation Women Rock (here Rock is used as a verb) to The Orpheum. More of a show than a concert, it features the music of songwriters Carole King, Irene Cara, Holly Knight and Joni Mitchell. While some of the songs performed were written by men, they essentially pay homage to the women who influenced rock and popular music more by interpretation than creation.

Maestro Tyzik explained the reason for putting the show together was that he believed that women had been overlooked relative to their talent and it was time to redress this inequity. I personally don’t share his perspective. Female recording artists have actually out-sold their male counterparts in recent decades. Song writing is perhaps a different matter; although, you never hear the likes of Dolly Parton, Patti Smith or Kate Bush complaining.

It was Katrina Rose wearing a royal blue dress, one of three guest vocalists to share the stage, getting the evening off to a great start in a timely tribute to the late Janis Joplin with “Piece of My Heart.” Fans of the reality television program The Voice might remember Katrina Rose from being a contestant a couple of seasons ago. She was happy to announce that she would be celebrating her 36th birthday at the Saturday evening concert.

Next up was Shayna Steele, wearing a form-fitting black dress, to sing “Dancing in the Street.” Ms. Steele is the oldest and arguably the most experienced performer of the three interpreters. I remember seeing her perform at David Lam Park in the Vancouver International Jazz Festival a few years ago. Steele also covered the token Canadian contribution - Joni Mitchell’s “Both Sides Now,” which very much suited Maestro Tyzik’s orchestral arrangement.

Slowing down the tempo, it was the turn of well-travelled Cassidy Catanzaro to lend her voice to the first of five Carole King compositions, starting with “So Far Away.” Wearing a floor length shimmery gray dress, her slender frame and light brown curly hair suggested a passing resemblance to a younger Carole King. She also possesses a similar vocal timbre to the iconic singer-songwriter.

Katrina Rose returned to the stage to take on a re-arranged version of Holly Knight’s “Love is a Battlefield.” Sung (beautifully) in a minor key, though not as Pat Benatar originally recorded it, but as a ballad, as the songwriter had intended.

Maestro Tyzik and the orchestra opened the second set with the only tune played without vocals. The 1974 funk-jazz tune "Pick up the Pieces" by the Average White Band is really an anomaly, since it was composed and recorded by an all male sextet.

The three vocalists may have reached this point of their respective careers via different routes, but on the occasions when they joined their voices together, as with Carole King’s “Natural Woman” and the Tina Turner classic “Proud Mary” that closed the show, their collaboration produced sumptuous harmony.

It was perhaps appropriate to close the show with a couple of songs made famous by Tina Turner. With “What’s Love got to do with it” Shayna Steele delivered much of the sexual energy that the eighty-year-old legend is distinguished for.