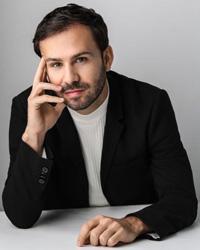 WHEN & WHERE Thursday, April 22 at 2pm | Streamed from the Orpheum Theatre & Christ Church Cathedral

Two Scandinavian composers and a British composer who are perhaps better known for works not in this concert are featured in this afternoon’s program.

First we hear Jean Sibelius’ Suite for Violin and String Orchestra, Opus 117, recorded in an earlier performance from Christ Church Cathedral with James Ennis leading the VSO string section. The work consists of three short movements evocatively titled: Country Scenery, Evening in Spring and In the Summer. We hear delightful finger plucking of violin and cello strings throughout the third movement. Sibelius is more closely associated with the tone poem Finlandia, however his violin suite, when played with such bravura by James Ennis, can be just as captivating.

For Peter Warlock’s Capriol Suite, we go back to the Orpheum stage. As one may suspect, the name Warlock is actually a pseudonym brought about from his avid interest in the occult. Maestro Andrew Crust’s interpretation of the Capriol Suite is vigorous, yet tender depending on which of the six dances are being explored. The first, Basse-Danse set in D minor, demonstrates Warlock’s use of contrapuntal motifs. Pieds-en-l’air takes inspiration from a ballet, possibly performed in triple rhythm, while the final movement, Mattachin, is a lively folk dance that has purpose and flair.

Edvard Grieg’s Holberg Suite, Opus 40 was performed by twenty string musician without a conductor - though very ably led by concertmaster Nicholas Wright. As the title suggests, it was commissioned as a tribute to satirist Ludvig Holberg. It is, as Andrew Crust describes “music from olden days made modern.” The suite has five movements starting with Praeludium (allegro vivace) and ending with Rigaudon (allegro con brio). While never as popular as Grieg’s Peer Gynt Suite, it does embody the subtle melodies that the Norwegian composer is famous for.