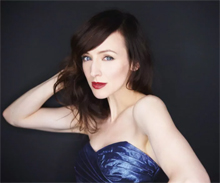 Tribute concerts generally fall into two categories. The mediocre ones are typically performed by look-alike impersonators of a popular artist’s style and physicality with varying degrees of accuracy. The good ones focus on the music that evokes the spirit and talent of a unique artist. I’m happy to say that this concert, a tribute to the inimitable Joni Mitchell fell in the latter.

Canadian vocalist Sarah Slean does not look like her tribute subject, nor does her voice sound similar. Nonetheless, she seems an obvious choice to perform a selection of the iconic singer-songwriter’s well known and less well known songs. She seems to have a genuine affinity for Mitchell’s music, especially the songs that have a jazz influence. Like Mitchell, Slean began her music career at age twenty. Now, only in her mid-forties, the Ontario born Slean has been around the music industry for twenty-five years. She steps across the Orpheum stage in a gold sequined, sleeveless full length gown – something that Joni Mitchell would likely never wear.

Slean and Maestro Karl Hirzer kicked off the evening with plaintive renditions of Mitchell’s early catalogue: A Case of You and Judgement of the Moon and Stars. A Case of You is an interesting song - combining Mitchell’s world-weary with youthful innocence.

Chinese Café from her 1982 album Wild Things Run Fast offers a change of mood. It’s a de facto cover version of Unchained Melody; originally scored for the 1955 film “Unchained.” The orchestra bring out the unmistakeable melody lines beautifully.
Despite being recognized as a singer-songwriter, Joni Mitchell is also an incredible interpreter of other people’s music, so it was no surprise to include a couple of “remakes.” Answer me, My Love is an English language version of a German song titled Mütterlein. I’ve personally considered Frankie Laine’s 1953 recording to be the definitive version.

Just before the intermission, the featured performer scampered off the stage in a hurry, appearing to be in some difficulty, leaving her accompanist Mark De Jong to perform solo alto saxophone on Cherokee Louise – it did give the audience an opportunity to hear an orchestrated non-vocal version of the song. To the artist’s credit, she did perform a vocal rendition of Mitchell’s sadly nostalgic song about a childhood friend at the end of the concert.

Ms. Slean returned to the stage after the intermission to encouraging applause and looking much more composed. Together with Mark De Jong on tenor sax and the orchestra’s brass section, she delivered a bombastic rendition of Sex Kills. Next, was the iconic song Woodstock. Mitchell didn’t perform at the Woodstock festival in 1969, but she was moved to write this fabled metaphorical version and Slean gives the song the dactylic delivery it deserves.

The evening ended, predictably, with Both Sides Now. Originally conceived as a simple song for vocals and acoustic guitar, the song has since become a classic. Sarah Slean made the song her own.