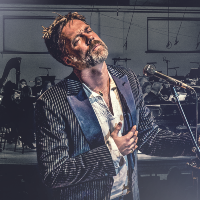 The VSO’s opening melody Valse Triste warmed up the crowd eagerly waiting in anticipation for their beloved Canadian vocalist to enter the stage. Dressed in all black, he emerged onto the stage, grabbed the microphone and told the audience he is still celebrating Halloween while sporting his skeletal Jean Paul Gaultier shirt that he advised he was never taking off. The first note escaped his mouth filling up the entire theatre with his powerful vocals and the audience instantly knew they were in for a treat that evening from Rufus Wainwright – a gifted entertainer, musician and vocalist who had returned to Vancouver.

The set started off with his folksy pop music, raising the audience’s energy seen through feet tapping throughout the Orpheum to his tunes. Wainwright entertained the audience between songs with personal anecdotes and upcoming opportunities he will be working on such as the release of his new album next year. In typical Rufus fashion, he didn’t shy away from speaking to certain political travesties going on around the world, some quite close to home, and how he uses music to help navigate through these challenging times.

Wainwright advised that the second half of the show wouldn’t be as cheerful as the opening since he will be diving into his operatic and more solemn songs. He dug deep into the piano keys as he belted out his anthems in both English and French, playing tribute to his hometown of Montreal with Les feuxd’artifices (The Fireworks).

He sang a song about his American father and then told the crowd he would have to balance it out with a song for his Canadian mother that he wrote after her passing – Candles. His vocal power and cadence throughout his performance brought a certain feeling of respect within the room, feeling privileged to witness someone with such natural talent.

As he left the stage, the crowd erupted in applause with a standing ovation and he returned to perform Oh What a World as his encore. Leaving the stage, teasing the audience, he came back for a second encore Over the Rainbow, performed sitting on the stage floor looking up into the night. Leaving the stage a third time, the crowd didn’t stop clapping, inciting him to return one last time for what they had been waiting all evening for. And he did, closing with his trademark ballad, Hallelujah.

I’ve always admired Rufus Wainwright for his raw talent and his openness. Looking at the diversity throughout the audience, it was apparent that he still touches people with a career not fading anytime soon.