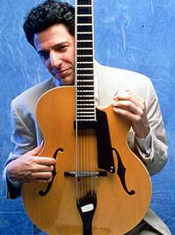 The Vancouver Symphony Orchestra
A Century of Nat ‘King’ Cole

It’s a happy coincidence that the birth of Nathaniel Adams Cole in Montgomery, Alabama was the same year as the VSO’s original establishment exactly one hundred years ago. It’s this coincidence that provides for a double celebration.

Tribute concerts generally fall into two distinct categories: good and bad. The bad ones usually employ hackneyed impersonations of a popular artist’s style and physicality with varying degrees of accuracy. Good ones balance the musical spirit of the artist’s body of work with their own unique talent. I’m happy to report that this concert falls in the latter.

New Jersey native John Pizzarelli is an accomplished jazz musician in his own right and considered to be a prime interpreter of the Great American Songbook. He would therefore seem to be the perfect choice to perform a selection of the late, great jazz pianist and singer’s best known songs.

Pizzarelli kicked off the first set with “L-O-V-E” followed without interruption by the more popular “Errand Boy for Rhythm,” a song penned by Cole himself. Nat Cole was originally a jazz pianist who could swing with the best, but later he was perhaps best known as an interpreter of romantic ballads. Pizzarelli and his talented trio set out to show both sides of the concert’s subject. Along with the next song, a first commercial success for Cole, “For Sentimental Reasons” other silky smooth ballads like “For all we know” and “The very thought of you” were featured in the repertoire.

The quartet and orchestra ended the first set with instrumental/orchestration versions of “Body and Soul” and “Honeysuckle Rose.” The VSO’s lush orchestrations, under the energetic direction of conductor John Morris Russell, generally combined well with the jazz quartet’s loose, expansive style.

As a singer, Pizzarelli has the same pleasant crooning style as Harry Connick Jr. While he may not have an extensive vocal range, he interprets Nat Cole songs with eloquent expression. His musical talents are matched by his wry humour and he occasionally likes to share with his audience amusing anecdotes, particularly when often referring to stories about his father, virtuoso guitarist Bucky Pizzarelli.

Even the best artists have recorded a few ‘throw-away’ tunes. With Nat Cole “Orange Coloured Sky” is one. Most will know the song only by the onomatopoeia in the lyrics - flash, bam, alakazam. Personally, I would have easily preferred the inclusion of the wistful “When I fall in love” over this tune.

Devoted fans may have had to wait until the end of the concert to hear their favourite Nat King Cole tune, but they wouldn’t have been disappointed with the well blended medley of Cole favourites that included “Mona Lisa,” “Ramblin’ Rose,” “Unforgettable,” and the haunting “Nature Boy.”

The quartet closed the show with a spirited rendition of Bobby Troup’s R&B standard “Route 66.” After an appreciative ovation, the guys remained on stage for a predictable encore: “Let there be love.”