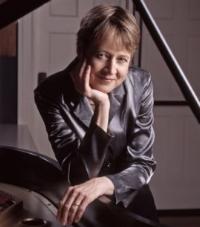 Programme Mozart’s Piano Concerto No. 24; Ian Cusson’s Songs from the House of Death; Schumann’s Symphony No. 4

It is a grand setting at the Orpheum Theatre and the lovely VSO performance on April 8 with pianist Jane Coop and mezzo-soprano Krisztina Szabo matched the grandeur.

Jane Coop is one of Canada’s eminent pianists and classical performers. At just 19 she won first prize in the CBC Radio national competition and first at the Washington International Competition. Since that impressive beginning she has been moving audiences worldwide with her heartfelt interpretations and performance of classical music.

Coop has played at Bolshoi Hall, Kennedy Center, Roy Thompson Hall, La Salle Gaveau in Paris. Listening to Coop is comparable to a summer afternoon sitting in a favorite patio chair as the sun warms your face, the breeze touches your senses and the sounds of nature enchant. Her renditions are like a calming wave.

The VSO Guest conductor was Nicolas Ellis, Artistic Director, Conductor and Founder of the Orchestre de l’Agora and presently Artistic Partner to the Orchestre Métropolitain and Yannick Nézet-Séguin.

Another evening highlight was the commanding performance of mezzo-soprano Krisztina Szabó, an impressive star in the operatic world with outstanding reviews. Among her captivating performances are Mozart’s Mass in C Minor with the Cleveland Orchestra at the Blossom Music Festival, St. John Passion with Tafelmusik; Beethoven’s Mass in C Major with Kansas City Symphony; Messiah with Portland Baroque Orchestra and Early Music Vancouver and performing as Gertrude in Hänsel und Gretel with Canadian Opera Company.

The VSO orchestra performed splendidly and guided aficionados with a memorable and soothing evening of classical music at its finest.