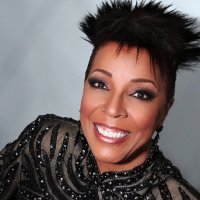 Vancouver Symphony Orchestra: London Drugs Pops
For the Love of Song: Dee Daniels with the VSO

Dee Daniels’ musical career has been as diverse as her distinct four-octave range. A voice that was first nurtured in Gospel music at her stepfather’s church choir in California. She is just as confident performing in front of large orchestras like the Boston Pop and the Rochester Philharmonic, as she is singing with piano trios.

Performing on a sub-stage set up in front of the main stage to a sadly empty auditorium, Ms. Daniels looked very fit in a silver and grey strapless full length gown and sporting grey hair she has come by naturally. While there was no live audience, I suspect there were many like myself watching and listening via mirror screening on AppleTVTM.

The singer kicked-off the fifty-minute concert with a couple of tunes made famous by the Nat King Cole Trio: rhythm and blues standard Route 66 and Mona Lisa, now part of the American Songbook. From Nat Cole, Daniels shifted her attention to Frank Sinatra with a tribute medley that included: I've Got the World on a String, Fly me to the Moon, I’ve got you under my Skin and All the Way. Her interpretations were more dynamic than Sinatra’s imperturbable crooning style.

Daniels would have certainly touched the souls of her virtual audience with Duke Ellington’s Got it Bad and that ain’t Good. The tune has been recorded, usually in a minor key, by everyone from Count Basie to Weather Report, but Daniels vocal rendition is among the best I’ve heard.

The veteran jazz singer ended the concert with another Nat King Cole tune, the haunting Nature Boy and a song I had never heard before; an inspirational Ballad of John Lewis, based on an essay written by American politician and civil rights leader, the late John Lewis. In a post concert interview with Conductor Andrew Crust, Daniels explains the process in developing the music to fit with John Lewis’ words that form the lyrics.

Maestro Andrew Crust led twenty-two musicians, though not all playing simultaneously, were spaced out on the stage according to provincial pandemic protocol, with all but musicians playing wind instruments appropriately wearing face coverings.