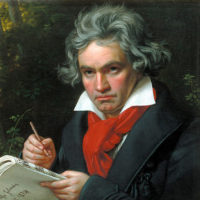 When the Vancouver Symphony Orchestra initially planned an ambitious celebration for Ludwig van Beethoven’s 250th birthday, they could not have foreseen it curtailed half way through by a mysterious virus now known as COVID-19.

It certainly started well enough. On Saturday, March 7th, the VSO opened BeethovenFest with Maestro Otto Tausk leading a performance of Beethoven’s Fifth Symphony and Shostakovich’s Violin Concerto No.1. Alas, by mid-week it had all gone sideways as a result of an advisory coming from BC Health regarding a limit at indoor events being limited to 250 persons.

But, as VSO President Angela Elster expressed in an open letter to ticket holders and supporters of the symphony, “It is in times of crisis that the human spirit is compelled to come together.” Therefore, lovers of serious music and concert ticket holders in particular were invited to come together for a livestreaming to BeethovenFest Virtual Finale.

Ludwig van Beethoven was born in 1770 in the small German town of Bonn. He moved to Vienna in his early twenties where he would live the rest of his life. His music provided a bridge between the Classical and Baroque eras. Though, it would be the Romantic style that he would become famous for.

After a brief introduction from Maestro Tausk, guest musician, Israeli pianist Saleem Ashkar and the orchestra launched in to Piano Concerto No.4. The orchestral playing was wonderful, especially among the woodwind section. Saleem Ashkar, who has established a reputation as a Beethoven specialist, is a formidable artist, with a fine range of colour and impeccable finger-work. He delivered assured execution of the composer’s tender lyricism.

Beethoven’s Pastoral Symphony, written during the same period as Symphony No.5 in C minor and performed publicly at the same concert, is a proverbial walk in the park compared to the fire and brimstone of the Fifth Symphony. Although, opposite ends of symphonic extremity, both pieces are considered experimental pushing the limits of musical boundaries.

Originally titled (by Beethoven himself) Pastoral Symphony, or Recollections of Country Life, it is deliberately evocative as music of nature. In the first movement Allegro ma non troppo, the orchestra conveyed the composer’s pleasant feelings awakened on one of his many strolls in the Austrian countryside.

Watching a concert on a screen for ninety minutes and listening through a standard audio system is hardly a substitute for the concert hall experience. However, there were some interesting comparisons in this undertaking. The positional arrangement of the musicians was more compact. Violins and violas were split equally on each side of the podium, while double basses were across the back of the stage. Different camera locations offered various viewpoints. The vista shots seemed to be taken from the front row of the dress circle.

However long the present chaos exists, and we all hope it will be weeks rather than months, patronage and sponsorship for the orchestra will not likely diminish.