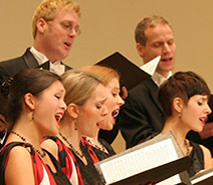 The Vancouver Chamber Choir
The Love that Moves the Universe

The concert begins with the singing of Bach's Jesu meine Freude, by the Vancouver Chamber Choir and the Pacifica Singers accompanied by the Vancouver Chamber Orchestra. The choirs blend beautifully together and do a great rendition of this famous piece that is so appropriately sung on Good Friday. There are some chorale variations that give the singing emotional intensity as it moves slowly from a gradual crescendo to its finale cadence.

Continuing the musical theme is the next choral song by Handel. His vespers psalm of Dixit Dominus with its incessant beat and choral repetition of Dixit Dominus keep the audience in awe of the strength of the piece. Both the choir and the orchestra give a bold and talented performance.

The most thrilling part of the concert is however, the last act. During the intermission the stage is cleared of choral risers. The music stands and chairs are arranged into a huge half-circle for the 20 musicians and 20 singers, who each have a score, no two the same. The music starts with a long, soft introduction of chromatic, built-up chords and the choir sings R. Murray Schafer’s The Love That Moves the Universe, which is inspired by the apocalyptic last third of the greatest poem written by Dante Alighieri.

The concert now turns almost magical and you are transfixed from your earthly seat to heavenly heights. I think because of Dante's ideas of circles of heaven and circles of hell the stage transforms to the centre of the cosmos. Director Jon Washburn describes the work as a 'sonic as well as a spiritual journey.' Schafer goes through some wonderful textured sounds in his music and as Washburn explains “breaks into little bits of four-part harmony that have that Monteverdian cast.”

The finale is magnificent with three soloists in different parts of the semicircle singing in ethereal soprano voices accompanied by three bells. The sound is beautiful leaving you superbly elated to have watched such a splendid work of musical theatre.