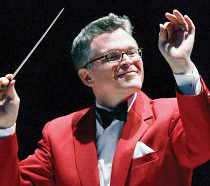 Desare was good. The audience loved him. He wasn´t Sinatra, but you could almost figure out something about his moves, his looks, perhaps calling to mind a young Sinatra.

Called “two parts Frank Sinatra and one part Billy Joel,” crooner and pianist Tony DeSare takes on the legend of Ol’ Blue Eyes himself. From jazz clubs to Carnegie Hall to headlining with major symphony orchestras, Tony DeSare delivers a fresh take on old school class in a tribute to Frank Sinatra that includes songs like Fly Me to the Moon, One for My Baby, The Summer Wind, Luck Be a Lady, Witchcraft, My Way, and more Sinatra classics.

The audience was also asked to participate singing New York New York and Ray Charles´ Hallellujah, Love Her So! But from the looks of it, Desare is truly an entertainer. He even gave us samples of non-Sinatra songs, singing Jerry Lee Lewis´Great Balls of Fire and a Beegees song. He also sang from his original repertoire, How I will Say I Love You and Tango in New Orleans.

The audience composed mostly of seniors, most probably Sinatra fans like myself, left happy after giving him a standing ovation and feeling totally entertained.