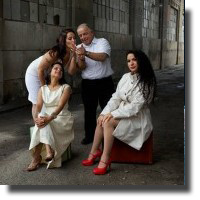 PuSh Festival, The Cultch and Touchstone Theatre
The Road Forward

The Road Forward is a combination of musical theatre and a multimedia concert, created, produced and performed almost entirely by Canadian aboriginal artists (guest musician Richard Brown on drums was the only non aboriginal on stage). The show was originally produced in a compact format for the 2010 Cultural Olympiad in Vancouver.

The roughly twenty songs, performed solo, or in groups, celebrate the achievements of First Nations people and pay homage to those who struggled with adversity and injustice.

Squamish Nation elder Latash Maurice Nahanee welcomed the audience, first in his own language and then in English, followed by his own rendition of Chief Ian Campbell’s “Canoe Journey Song.”

One by one, fifteen performers took to the York Theatre’s tiny stage wearing sombre black clothing. The exception was the female vocal trio of Jennifer Kreisberg, Cheri Maracle and Michelle St. John who wore white dresses. The entire company remained on stage for the total ninety-minute, non-stop show.

Some songs have a deep poignancy, like “1965” written by Métis songwriter Marie Clements and Jennifer Kreisberg, which brings to light life expectancy of aboriginal males is approximately 33 years (surely no longer a valid issue). Another song by the same pair of writers is “My Girl’s Song” about young native women murdered on the Highway of Tears.

Salish artist Ostwelve (Ron Dean Harris) gave the most depreciatory, and yet perhaps, the most spellbinding performance with “If you Really Believe.” The lyrics are taken directly from George Manuel’s controversial speech when he was executive chief of the Assembly of First Nations.

Not all the music performed during the evening was specific to Native culture. Jennifer Kreisberg, Cheri Maracle and Michelle St. John delighted everyone with their interpretation of “Lady Marmalade” – a song that has become synonymous with sisterhood. The trio led by the dynamic Michelle St. John brought down the house with “Thunderstruck” originated by Australian hard rock band ACDC.

Throughout the performances, the audience was able to watch a backstage screen illustrating newspaper and magazine articles, photographs and stories mostly on the subject of human rights.