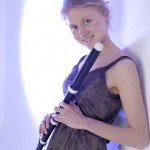 What the coffee-house of 18th century London were to politics and business, and the Paris cafes were to the French Enlightenment, so the German Kaffeehaus was to music, a centre for professional and amateur alike to perform, hear and talk music . The Zimmermannsche Kaffeehaus, cosmopolitan, comfortable and one of the largest and most elegant in Leipzig was where the young Telemann established his music club and where, some years later, JS Bach became the director of the same collegium musicum. The titles of some of the pieces played at Zimmermanns Coffee-House are known but with weekly programmes throught the year for many years, far more is a question of speculation, giving Pacific Baroque Orchestra free rein with choosing music of the time and place.

The programme opened with music by Frantisek Benda, a Bohemian composer in the employ of Frederick the Great, highly thought of by his contemporaries and a colleague of CPE Bach. The Flute Concerto in e-minor is in three movements, a bouncy Allegro con brio, an elegant Adagio un poco Andante and a spicy Presto. The conversation between soloist and orchestra warmed under Alexander Weimanns guiding hand and Soile Stratkauskas quickly demonstrated her apparently easy mastery of the baroque flute in clean and lively playing. Her stylish embellishments, especially in the slow second movement, and bright, energetic playing from everyone established the standard for the evening.

The Ouverture in g minor which followed is a point of discussion for musicologists and historians. Once thought to be by Bach, J.S., it was then claimed for Bach, W.F, his oldest son The programme notes suggest some sort of cooperative venture. At any rate it is a suite for strings of short varied movements, only one, the Menuetto Trio based on dance. Of the others, there is Torneo (The Tourney), Aria (a Song) and finally Capriccio, that is to say, a piece in free form, but it is marked as Fugue. Clearly this is a piece for fun and amusement and that, with a brief interlude, is just what was delivered. The Aria and the Menuetto-Trio provide a calm centre and were most movingly played.

After the intermission, the configuration of the orchestra changed, the harpsichord moved upstage from front and centre and leadership was taken up by Concert Mistress Chloe Meyers, who led with equal skill and finesse. Soile Stratkauskas rejoined the full orchestra for Telemanns Paris Quartet in e minor, a strongly engaging piece full of French characterizations (Gracieusement, Distrait) and vivid dialogues between flute and violin, the final movement, Modere, a dying fall

Last, but never least, J.S.Bachs Brandenburg concerto # 5 for flute, violin, and harpsichord, pulled together all the talents of orchestra and soloists into a splendid and genial display. Chloe Meyers and Soile Stratkauskas demonstrated again their virtuoso skills, sociable conversation and sense of fun, the orchestra, including violas (Karen Vincent and Glenys Webster) cello (stalwart Nathan Whittaker) and Violone, (the exceptional Natalie Mackie) played joyfully. Alexander Wiemann, who played the harpsichord accompaniment throughout, shone in the fiendish cadenza Bach wrote at the end of the first movement, probably for himself. Brilliant virtuoso passage-work evolved into nearly unbearable tension before the orchestra dived in to the rescue with a final flourish of the theme. The affecting second movement, by Stratkauskas, Myers and Wiemann alone,felt companionable and gently emotional and the evening was polished off with a jolly rendering of the Allegro