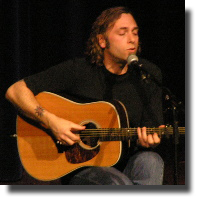 It was Entertainment Program Director Fiona Black that welcomed back Kelly Joe Phelps to the NSCU stage, although the last time he performed in Vancouver was as the opening act for the Wailin’ Jennys at the Chan Centre.
Phelps performed a balanced repertoire of new and old material, with the new coming from his recently released solo album Brother Sinner and the Whale. As its title might suggest, the songs present a departure from his laid-back folk/blues staple to gospel compositions, inspired in large part by the Book of Jonah. Phelps’s time as a jazz musician shows through in the tempi of tunes that drive along with wholesome fluency.

The bluesman started with one of his older tunes that appears to be a personal favourite, River Rat Jimmy – a song that sounded like it could have been composed by Paul Simon. He followed up with a couple of songs from his latest foray in the recording studio, the heartfelt Hard Times They Never Go Away and the traditional sounding Goodbye to Sorrow.

For a praiseworthy cover of Blind Willie Johnson’s God Don't Never Change, Phelps put down his standard acoustic guitar and picked up his Dobro guitar (that’s the one with metal discs inside the body like the one Mark Knopfler of the Dire Straits plays). The sonance of the Dobro guitar is characteristic of Delta blues and Phelps can make it sound like it’s playing itself.

There likely aren’t too many performers who spend an entire concert sitting in a chair alone on stage and keep an audience spellbound, but Kelly Joe Phelps is certainly one of the few who can. He ended the first set with the oddly titled Moonshiner, a tune I’d never heard before yet felt as though I’d heard it many times.

Phelps kicked off his second set with Talking to Jehova, one of his new songs that has a traditional blues affectation and the instrumental Brother Pilgrim. The audience seemed to enjoy his “new stuff” but they (including me) loved his traditional interpretations. Like his treatment of the Robert Johnson composition Hellhound on my Trail.

Kelly Joe Phelps is a true troubadour who is constantly exploring and expanding new directions. He is often under-rated as a result of his preference for playing smaller venues. Judging by his reception last Thursday night (29 November), he’ll be welcome back to Vancouver anytime.