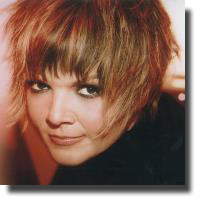 The Cap Jazz Series
Karrin Allyson with NiteCap and 'A' Band

I don’t believe I’ve ever listened to a Karrin Allyson recording that I didn’t enjoy at least part of. The honey blonde, Kansas born singer may be arguably the most versatile jazz vocalist around today. She has a warm and slightly smokey voice that is compatible with styles that range from bossa nova to contemporary folk and probably anything in between including show tunes. Her musicianship started with studying classical piano and performing in musical theatre.

After an enthusiastic introduction from Director of Programming Fiona Black and an opening tune by NiteCap, a vocal jazz ensemble led by Réjean Marois, entitled Moving On; Allyson kicked off her concert with a sublime interpretation of The Shadow of your Smile backed up by NiteCap and featured Eunji Shin on piano. Next, she moved along with a couple of bossa nova stylings: Quiet Days of Quiet Stars and Desafinado re-arranged by NiteCap alumnus Lane Price who now performs with musica intima.

The versatile Ms Allyson showed that she’s okay with slowing down the tempo with Midnight Sun. The number gave Alex Dobson an opportunity to lay down some deep-toned bass lines. For me though, one of the many memorable moments of the evening was a loose and expansive take on the Duke Ellington tune Sophisticated Lady. She closed out the first set with a fresh sounding cover of Overjoyed - one of Stevie Wonder‘s best - featuring scintillating guitar work from Keith Sinclair.

For the second set, Nitecap were replaced by the 17-member student jazz orchestra ‘A’ Band led by Brad Turner. Together with the featured performer, they broke straight into a swinging rendition of the Rodgers and Hammerstein show tune Hello Young Lovers. The jazz songstress continued with the popular Frank Sinatra standard All or Nothing at All showing off her vocal agility with some fine scat, then cut straight into a fierce rendition of Hum Drum Blues that was anything but hum-drum.

The concert concluded with Laura Caviani’s straight ahead arrangement of the oft-covered Them There Eyes; never one of my favourite songs, but Allyson’s rendition went some way to obviate my indifference. After an appreciative ovation by a spirited crowd, Allyson returned for a surprising choice of a solo encore that saw her accompany herself on piano to Billy Joel’s And so it Goes, sung with all the heartfelt poignancy the composer intended.