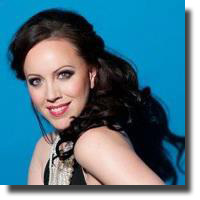 What was originally advertised as the Caroline Markos Quartet turned out to be Caroline Markos plus Jodi Proznick and Miles Black. Ms. Markos’s career as a jazz singer predates her training in classical voice, so her repertoire of jazz standards, pop fusion and bossa nova were delivered with a natural warmth and texture. The tall brunette kicked off the show with a couple of songs that indulged her fixation of the ‘American Songbook’ with “Lullaby of Birdland” and a fun up-tempo treatment of “Pennies from Heaven.”

Markos then switched tempo with Billie Holiday’s “God Bless the Child,” showing that she is just as proficient singing in a minor key. She followed up with a flawless rendition in English of Manha de Carnaval, that featured some progressive improvisation from Miles Black on piano and Jodi Proznick on double bass.

The singer is obviously relaxed performing in front of an intimate audience (the Silk Purse’s music salon was at its capacity with around fifty patrons), entertaining the audience with engaging anecdotes between songs. She is also astute at adapting her repertoire to suit a particular audience.

A clear favourite with the audience on this occasion was a jazzy version of “I Hear Music” from the film Dancing on a Dime that opened the trio’s second set. Markos is able to take chestnuts like “I’ll be seeing you” and make them sound as if you were hearing them for the first time. The song was much loved during World War II, when it became an anthem for soldiers serving overseas. She concluded the performance with the oldest song on her song list - George and Ira Gershwin’s whimsical “Blah, Blah, Blah.”

Caroline Markos is perhaps not a jazz innovator, though, she does have an uncanny ability to relate to every kind of audience with a personable style of delivery. And how many young jazz vocalists gets Maestro Bramwell Tovey (Vancouver Symphony Orchestra's music director) to attend their concert?