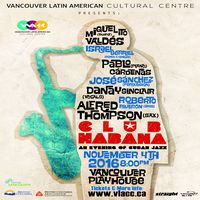 There's something about Cuban music thst makes you want to stand up from your seat, sing and dance. And that's precisely what happened during the 2-hour no-intermission concert of Vancouver Latin American Cultural Centre's (VLACC) presentation of  Club Habana: An Evening of Cuban Jazz, a musical experience showcasing composers Alfred Thompson and Miguelito Valdés. These world-class musicians gave us a taste of the current state of contemporary Cuban jazz, presenting original works as well as revisiting classic repertoire.

One original work of Valdes who also acted as emcee in this program was "Miguelito's Blues", explaining that in the 10 years he's lived in Canada, his compositions have reverted to traditional blues jazz, although some, he said, were a fusion of Cuban and traditional jazz.

In Thompson's compositions, a piece he created was "Y ahora que", questioning Obama's opening up relations with Cuba and he poses the question, "And now what?" Another of Thompson's composition which I liked was "Suave Aroma". He commented that he was asked why this piece sounded more South American (mas andino) than Cuban. In fact, I did feel a Brazilian bossa nova beat to this tune.

Two classic pieces sung by guest vocalist Danay Sinclair were "Besame Mucho" and "Quizas, Quizas, Quizas", popularized by Trio Los Panchos and later sung by greats like Nat King Cole. With "quizas", she got the audience singing the refrain.

As always, in latino concerts, you have everyone dancing at the end. In the encore number "Son a Guajimico" everyone was dancing o the tune of this traditional Cuban rhythm, a composition of Alfred Thompson.

It felt like everyone (it was a full house) got their money's worth ($40 a ticket) as everyone danced away laughing, dancing and humming the songs from this concert.