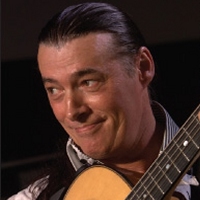 This is an evening of exquisite intricate guitar music at the hands of four magnificent guitarists from around the world. The talent tonight is sitting on the edge of unbelievable mastery.

Debashish Bhattacharya from India was nominated for two Grammy Awards for Best Tradition World Music Recording charms us with his 20 something stings on his custom slide guitar. Bhattacharya designed this amazing slide guitar himself. He played to his first audience at the age of four. Now we hear the fruition of all those years of playing in tonight’s performance.

Lulo Reinhardt, a Gypsy jazz legend has his own style with a deep sound that is mesmerizing. The fluidity of his playing is absolutely beautiful. His is rhythmic and powerful. It is with great pleasure that I have this opportunity to listen to him tonight. That Gypsy sound is unmistakable and moving.

Chrystian Dozza, Brazilian composer and guitarist touches our hearts with his romantic works. He is gifted and becomes one with his guitar.

Luca Stricagnoli, from Italy has been nicknamed “Wonder Boy”. He is an accomplished drummer as well as a guitarist. He drums on the guitar while he strums. He picks and his fingers fly along the guitar producing flawless music. He is humorous as he scratches his back with a violin bow then plays 3 guitars at one time using the bow.

What is really great is to have guitarists who have not played together long, duo up. They seem to have a really good time and have wonderful synchronicity. There is nothing like being in the same grove with another musician. It does wonders for the soul.

As a new guitarist myself, tonight’s performance is absolutely inspiring. The speed, fluid movements, captivating rhythms and the relaxed postures of these highly professional players makes this a night to remember.