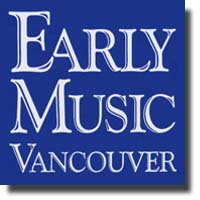 Polychoral music – music for more than one choir – was developed in San Marco in Venice where several vocal and instrumental groups could be stationed around the church to produce a full 16th century surround-sound. The question on Friday evening was, Can this be translated to a modern church in 21st century Vancouver?

The answer is that it can be unexpectedly well suggested by the combined forces of Studio de musique ancienne de Montréal and Les Sacqueboutiers de Toulouse in a programme of Motets, (plus a Madrigal for a little Italian jeu d’esprit) alternating with instrumental pieces by Giovanni Gabrielli, the premier composer of this type of music.

No holds were barred in terms of volume and the church was filled with layers of alternating, echoing and overlapping lines of music. Sometimes shoulder to shoulder and sometimes dispersed in groups on either side of the audience, singers and instrumentalists blended together in a surprising unity of sound. Diction and phrasing were good.

Moments stand out, the resounding lowest of low notes from the bass sackbut, the equally resonant notes of the bass voices, the 3-voice choir in “In ecclesiis”, indeed, observation of how loud the human voice and how soft cornets and sackbuts can be. But the impression overall is one of ensemble. And another surprise, subtlety.

While intrinsically bold, the instruments were never brassy. Under Christopher Jackson’s enthusiastic direction dynamics and tempi were varied, carrying the music and the programme forward with purpose and interest. A magnificent instrumental opening demonstrated the power and virtuosity of sackbuts (early trombones) and cornets. Later in the programme the Jubilate Deo grew imperceptibly from a delicate piano to a grand fortissimo. The a capella “Miserere Meus” was intimate and personal and the bigger pieces ranged from the expressive “In ecclesiis” which closed the first half to the serenely confident “Magnificat” which closed the programme.

At the end, the sounds of Oak Street traffic could be heard, but the audience went home with heads full of rich glories.