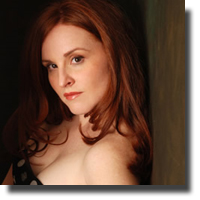 It’s perhaps only in the genre of jazz that an artist in her mid-thirties, performing since she was nineteen, would be considered a “rising star,” but after suspending a promising career in music to obtain a Master's degree in French literature from McMaster University and a Teacher’s Certificate, it looks like Diana Panton’s moonlighting job is back on track.

The auburn-haired Hamiltonian chanteuse blew into town for the first stop on her first tour with veteran jazzmen Don Thompson and Guido Basso plus youthful (by comparison) guitarist Reg Schwager. If the alluring Ms. Panton is entertaining any apprehension about life on the road, it didn’t show in an audience friendly concert last Saturday night.

She stepped on to the stage with her trio of “A-team side musicians” wearing a green and black ankle length sleeveless dress and kicked off the show with a couple of songs that indulged her fixation on our only natural satellite, Destination Moon and Reaching for the Moon. In between, she offered a smooth rendition of Brazilian songwriter Antonio Carlos Jobim’s Corcovado (Quiet Nights of Quiet Stars) in both official languages.

Panton showed that she is also adept at arranging show tunes in a jazz styling with Wouldn’t it be Lover-ly? from My Fair Lady and an effortless bilingual interpretation of Tea for Two from No, No, Nanette. She stumbled a little on Henry Mancini’s Moon River. Played in a minor key, it had the effect of making a slow tempo song sound almost dismal. However, she was back in the zone to end the first set with the Billie Holiday song Me, Myself and I.

Panton started off her second set with a rather curious cover of Jerome Kern and Oscar Hammerstein’s 1932 pop tune, I Told Every Little Star. The song might be best remembered as Linda Scott’s first of many hits in the sixties. This was followed by a repertoire that the singer is infinitely more comfortable with – a pair of bossa nova tunes from her “Brazilian” album - The Night has a thousand Eyes and a flawless rendition in French of Manha de Carnaval (morning of carnival).

Panton may have saved the best till the last with, what I would consider to be, a definitive interpretation of the Lennon –McCartney tune And I Love Him from the Beatles 1964 album A Hard Day's Night. After a standing ovation, she returned to the stage with only Don Thompson, who accompanied her on piano for an encore performance of, what else, another “moon” song - Bart Howard’s Fly Me to the Moon.

The singer may not have the range of some of her contemporaries like Emilie-Claire Barlow or Norah Jones, but she knows which songs best suit her brand of bittersweet vocal styling - her strength is her vulnerability.