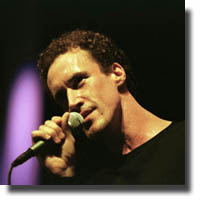 Though not particularly well known on this side of the North Atlantic, David Linx boasts a large following in his native Belgium and in France where he currently resides. It was typically generous of the Brussels born vocalist, that on his first visit to Vancouver, he would choose to perform with a group of musicians that have barely started their musical careers.

Now in his late forties, Linx has been recording since the mid-eighties, collaborating with the likes of Dutch jazz pianist Diederick Wiessels, Italian jazz trumpet player Paolo Fresu and Portuguese singer Maria João.

The first set of this Halloween concert at the Capilano University campus auditorium, was performed with members of NiteCap, a vocal jazz ensemble from the University’s Jazz Studies Program. The jazz singer, who is also a highly regarded percussionist, must have surely been delighted with the back-up he got from his accompanying Combo Group that comprised of Dean Thiessen on piano, Stephen Edwards on stand up bass, Madeleine Elkins on guitar and drummer Miles Wong. These music students could hardly have expected to have been familiar with the featured performer’s labyrinthine compositions.

After NiteCap, under the direction of Réjean Marois, started the evening off with “Little David’s Fugue,” Linx joined the band in the swinging “I Will Build Myself a Nation.”The singer slowed the mood down somewhat with the second tune, a haunting ballad entitled “The Art of Love.” Next was the ear-catching, swirling bacchanal of “Even Make it Up” performed in a scat duet with Nitecap member Natasha D’Agostino.

For the second set, Nitecap’s place was taken by the ‘A’ Band under the leadership of musical director Brad Turner. ‘A’ Band is the instrumental performance arm of the University’s Jazz Studies Program that consists of trumpets, trombones and saxophones supported by a four-piece rhythm section. Linx and the band kicked off the set with the oddly titled “Parrots and Lions,” a mellow Maria João composition. This was followed up by a tune that everyone had no problem recognizing – a turbo-charged version of Frank Sinatra's war-time hit “All or Nothing at All.”

The concert concluded with David Linx displaying his linguistic flexibility, teaming up with Brad Turner and the “A” Band with Aos Nossos Filhos (Letter to my Son), sung partly in English, partly in Portuguese. Linx returned for a single song encore – “I’m on my Way” chosen from his album Different Porgy, Another Bess, his own adaptation of George Gershwin as an American folk opera.