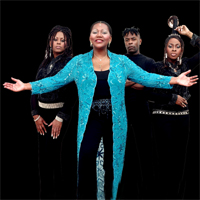 It was disco night last September 25th as everyone danced to the music of Abba And BoneyM. The difference was it was Abracadabra, a Vancouver  tribute artist band, and not the original Abba.. But BoneyM was the real thing. This nostalgic concert featured Boney M with original lead singer Liz Mitchell reliving the music of this iconic group from the 70’s and 80’s. The band sang hits from that era like “Daddy Cool”, “Sunny”, “Ma Baker”, “Belfast”, “Rivers of Babylon” and “Brown Girl in the Ring.”

Both groups got the audience singing and dancing and basically having a good time. Even the lighting effects gave the impression of a discotheque of the 1970s.

I think everyone got his / her money’s worth in this two-hour dance and singing session.
The first part of the show got the audience singing and dancing to the abba hits “Fernando “,  and “Dancing Queen”. Even the impersonators looked exactly like the ABBA band consisting of Agnetha Fältskog, Anni-Frid Lyngstad (better known as Frida), Benny Andersson and Björn Ulvaeus, all dressed in white.

The second part of the show was a stark contrast: from the all-white band to an all-black band. Even their costumes were black. And the audience loved the male performer who took off his shirt and was doing contortions with his breast.

Indeed, it was a nostalgic trip to memory lane, with the loud music (my ears were ringing when I left the theatre), but that's how it was in the good ol' days of disco.