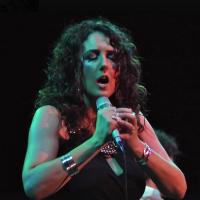 This was the second in a monthly online concert series streamed via LiveStream at Musea Broadcasting; Cilette Swann handling vocals and Roman Morykit on guitars. Roman and Cilette were married in Vancouver, British Columbia, after first meeting in Edinburgh during the 1990’s.

Canadian-born Cilette is a natural soprano, but more soulful than the typical classical soprano. British-born Roman is a virtuoso guitarist specialising in the Dobro resonator guitar. Their own music is a unique fusion of roots, blues and jazz. They also like to interpret other people’s music.

The duo get the sixty-minute concert going with one of their own compositions, “Older than its Name,” followed by the bluesy “I heard your voice, I had no choice” (may not be the actual title), featuring Roman on standard acoustic guitar. Next, Cilette slows things down with “Big Sky Lullaby,” a country-style ballad, a particular favourite of Roman – and I suspect a favourite of many of their fans.

While his partner was resting her tonsils, the guitarist switched instruments to the Dobro resonator guitar to perform a tune he wrote for his mother Carmelina. This provided the ideal segue for Cilette to shift into a cover version of Carol King’s “Natural Woman” which I don’t think they have ever recorded – too bad.

I didn’t think that I could possibly hear another version of “Angel from Montgomery” that would add anything to the numerous covers I had already heard. However, in a personal tribute to the late John Prine, who passed away this last week from complications from contracting COVID-19, Cilette delivered a plaintive rendition of Prine’s 1971 classic that featured accompaniment on Roman’s Sarthak electric guitar.
Next up, was a beautifully balanced, jazz inflected “Lovin’ Me” that really shows the singer range. The song shouldn’t be confused with another Gypsy Soul song – the similarly titled “Loving Me.”