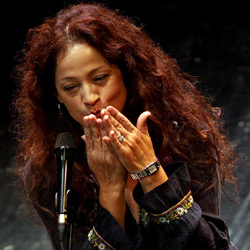 Perla Battalla in the House of Cohen

Leonard Cohen died on November 7, 2016 in Los Angeles at age 82. But if Angeleno singer Perla Batalla has anything to do with it, his music will live on forever. Batalla and Cohen enjoyed a protégé-mentor relationship for many years and eventually became close friends. As a teenager, she started her career as one of Cohen’s back-up singers for his 1988 concert tour. Last night, Grammy-nominated Batalla offered the ‘sold-out’ theatre some of the legendary Canadian’s signature tunes, as well as a few lesser known compositions.

Because of the time it took to seat late patrons, Ms. Batalla stepped barefoot onto the Rothstein Theatre stage around twenty minutes late. Wearing a black pinafore dress over a white blouse, she immediately, moved straight into “If it be your will” with her only accompanist pianist Michael Sobie.

Similarly to k.d.Lang (famous for covering Cohen’s Hallelujah), Batalla possesses a rich contralto voice that is perfectly suited to Cohen’s evocative songs. Interspersed between the songs, Batalla shared anecdotes of some memorable moments with the late songwriter. Before auditioning as Cohen’s back-up singer, she hadn’t been familiar with his work. So she purchased as many cassettes as she could find to listen to before meeting him.

Next was “Suzanne,” one of Cohen’s earliest compositions and one of the most covered. Judy Collins actually recorded it before Cohen did and later Anni-Frid Lyngstad recorded a version with Swedish lyrics. “Dance me to the end of time” was sung partly in Spanish. It was an opportunity to hear one of the Montreal Bard’s songs interpreted in a different language. Being of Mexican and Argentine heritage, Spanish is Batalla’s mother tongue.

Perhaps the least well known songs the singer performed were “Take This Waltz,” inspired by a Federico García Lorca poem entitled The Little Viennese Waltz and “Anthem.” The latter once performed as a duet by Batalla herself and Julie Christensen at the Sydney Opera House.

But the songs that were much appreciated by the capacity audience and received the utmost enthusiastic applause were “Bird on a Wire” and “Famous Blue Raincoat.” Perla Batalla and pianist Michael Sobie concluded the concert by paying homage to the sacrifices Cohen made for the sake of his art with the haunting “I came so far for beauty.”

They came back on stage to perform a generous encore with a Mexican folksong and (of course) “Hallelujah.” There was no valid cause to be disappointed the Batalla’s selection. However, for a personal point of view, I would have loved her to include “First, we take Manhatten” – that would have been the cherry on the cake.

Batalla certainly invests a lot of emotion into this very personal tribute. For many in the audience and particularly for the artist it’s catharsis.