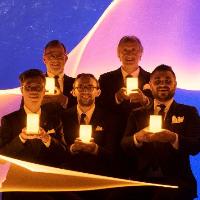 Now in its thirty-first year, the Vancouver based and internationally renowned Chor Leoni is a sixty-plus member male choir who once again bring their seasonal concert to the St. Andrew’s-Wesley United Church in downtown Vancouver. This year Chor Leoni presents its seasonal celebration of light and hope with a gallimaufry of traditional Christmas Carols, modern secular Christmas tunes and a song we usually hear on New Year’s Eve.

Starting with Gustav Holst’s To This Bleak Midwinter performed “in the round” and conducted from the centre of the church by Erick Lichte, who also arranged the piece for male choir in an ephemeral hymn setting.

The six concerts taking place on the weekend before Christmas provide a wonderful opportunity for Chor Leoni to create new memories for their audiences with new works. The first public performances of Don MacDonald’s Fantasy of Carols and Nicholas Ryan Kelly’s Cold Moon are very different, yet in their own way, equally enjoyable. Fantasy of Carols is an overlapping medley of Hark the Herald Angels, O Come Emmanuel and O Come All Ye Faithful delivered to perfection. Cold Moon is a musical introspection of the non-festive aspect of the holidays that implores the listener to contemplate on spiritual miens of Christmas.

In recognition of the Jewish festival of Hanukkah, which this year begins on December 18, we get to hear Nancy Grundahl’s arrangement of S’Vivon that includes a klezmer styled violin solo by Cameron Wilson. The choir concluded the evening with two of the best known and likely the most frequently heard songs at this time of year: Jingle Bells arranged by Keith Sinclair that included a guest appearance by one of Santa’s reindeers and Silent Night – a joint participation of choir and audience.

The gentlemen of Chor Leoni drew deserved applause for their vocal flexibility, harmony, and an ability to set the appropriate tone, whether it is playful or reverential.