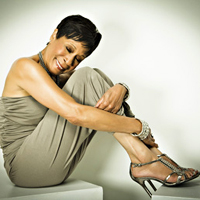 That overworked cliché in the entertainment industry, “not getting older, just getting better,” might actually be pretty accurately applied to Bettye LaVette’s career. Raised in Detroit, LaVette celebrated her seventieth birthday earlier this year, having started her recording career at age sixteen.

Recognised essentially as a soul singer, over five decades her eclectic musical style has embraced blues, rock and roll, gospel, country music and even disco. But she didn’t achieve commercial success until she started singing rock songs.

Introduced to the audience by entertainment co-ordinator Fiona Black, Ms. LaVette looking very fit in a black jumpsuit and high heel sandals, dove straight into her concert opener, "Unbelievable" from her latest CD Worthy. Her rendition was barely recognizable from the Bob Dylan original. She followed up with “When I was a Young Girl,” also from the Worthy album.

As if to prove (no proof necessary) her ability as one of the best interpreters of other peoples songs, she delivered a poignant rendition of George Harrison's anthemic ballad “Isn’t it a Pity (isn’t it a shame) from her 2010 recording Interpretations: The British Rock Songbook.

LaVette was no doubt aware that many in the audience came to hear her unique take on classic rock songs and she didn’t disappoint. Her interpretation of the Moody Blues “Nights in White Satin” played in a minor key was spell-binding.

Probably every concert that the singer gives, she’s expected to reprise her live breakout performance of the Who tribute concert at the Kennedy Center where she sang "Love Reign O'er Me." It has since become acknowledged as the definitive version - superior even to the Who original. After LaVette performed the song last night (Sept. 17) she received a standing ovation.

The Septuagenarian singer displayed the artistry of a consummate entertainer, supported by an accomplished four piece band playing it tight on John Prine’s “Souvenirs,” yet expansive covering the Lucinda Williams composition "Joy."

It’s too bad that the guy in the mixing booth didn’t match the calibre of the musicians. Less should have been more, particularly with the volume of Darryl Pierce’s drums that almost drowned out the singer’s song intros. Brett Lucas’s lead guitar sounded like a bass guitar.

Notwithstanding, Bettye LaVette and her band gave an immensely satisfying show. With a ninety-minute set full of passion and energy, she surely added to the ranks of her growing legion of local fans.