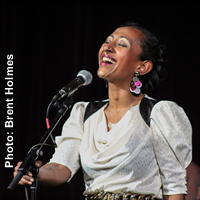 Alsarah enters onto the stage after the rest of her group. She is relaxed and confident as she calls out to the audience, “I didn’t come such a long way to sweat by myself!” She points down to the open dance floor space below her and then encourages everyone to dance there. Describing her group as an “East African retro-pop act”, they kick off with their first song, “Salam Nubia”, which is sung in the Nubian language. I have to assume that like me, the majority of the audience doesn’t understand the lyrics. The pulsing beat and rhythm coming from the band members, however, is a universal language for us all.

The group’s third song, “Nuba Noutu”, is what Alsarah calls the “unofficial Nubian anthem.” As she claps her hands joyfully over her head, people start rushing out to the dance floor. While the group performs this, I watch the purple flood lights flashing onto the wooden arch at the back of the stage, illuminating the outline of the former St. James United Church in a slightly surreal manner.

Alsarah’s family lived in Sudan, then relocated to Yemen, and finally immigrated to the U.S. in 1994, when she was 12. Alsarah is still concerned about Sudan politics, so in her protest song “Nar”, Alsarah and her sister Nahid sing in their native Arabic. They are accompanied with powerful bass guitar by Mawuena Kodjovi, accomplished drumming by Rami El-Aasser, and masterful oud playing by Brandon Terzic. The music from this song is now so stirring that more men suddenly join the dance floor.

The evening ends with a stunning encore performance of “Rennat.” The dancing stops and the dancers stand very still on the dance floor, quietly looking up at the stage and listening. Alsarah’s voice soars and Nihid’s voice echoes. The group’s musical blending of Eastern influences, Nubian traditional songs, and original compositions in Arabic has been a big success tonight!