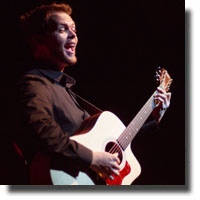 Chase Padgett is a great guitarist who presents a hilarious and emotional performance of 6 Guitars.

Tonight is a packed house at the Studio Theatre in the Surrey Arts Centre. Once Padgett starts his performance you soon realize why there are no vacant seats.

Can you imagine yourself changing into 6 personalities in a matter of minutes and not only that but playing guitar in totally different music styles. He bounces from jazz, country, blues, rock, classic, and Spanish Classical?

Padgett is a young man who has found his calling. He brings laughter, entertains with his wonderful guitar talent and he touches people’s heart strings with memories of the past and issues of the present. He also makes us aware of what is right and what is wrong and to live with a good character.

Padgett transforms himself from a 19 year old rock star to an 87 year blues guitarist who sits drinking whiskey or scotch (I don’t recall if he said what it was). The 87 year old takes us down memory lane and teaches us some of life’s lessons that he has learned along the way. His country personality reminds us of stories of lost loves.

People in the front row I am sure are getting a little nervous that Padgett would pick them out of the crowd and start asking them personal questions. The two members of the audience that he hones in on are really good sports and are brought to laughter by Padgett’s comments and solid gaze.

Padgett makes us ask ourselves “What does music mean to us?”. Where were we when a famous song was played and what songs really moved us?

His one man act moves at just the right pace and he keeps the audience laughing. If you are in need of laughter please look up 6 Guitars and find out where Chase Padgett is playing. I can guarantee you will not be disappointed.