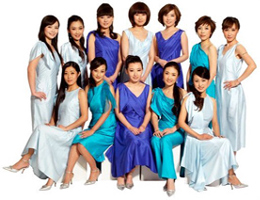 A Celebration of the Lunar New Year

When you see the Chinese all-female Twelve Girls Band (Nuzi shí'èr Yùefang) on stage it’s difficult to realise that they’ve been together since 2001 – the women look so young. Of course there have been some changes in personnel along the way, but the core group have been there since the beginning. The women of Twelve Girls Band continue the tradition of Yue Fang that dates back 650 to 900 AD when ensembles of female classical musicians played in the Tang Dynasty courts.

To traditional Chinese music purists however, the group have gone too far in compromising the art to satisfy Western audiences. In Monday evening’s concert celebrating the Lunar New Year, the musician’s clothing was as much a hybrid as some of the music they played. The women stepped on the stage for the first set, essentially comprising mostly of Chinese folk songs, attired in uniform red and gold dresses that blended the styles of the cheongsam and the western ballroom gown. For the second set, which was far more eclectic, the women switched to turquoise and pink knee-length dresses all styled individually to suit the artist’s personality.

The band kicked off the evening with “Jasmine Flower,” a lively 18th century Chinese folk song. Not as sedate as its title suggests and ideally suited to get the largely Asian audience in a celebratory mood. This was followed by an emotional interpretation of “The River Flow,” made famous by Japanese songstress Misora Hibari, and the jaunty, childlike “A Half Moon Climbs Up,” sung in unison by half of the band’s members.

The band’s second set offered a broader selection of music, featuring some virtuoso solo performances. In particular, “Samba Love” featuring Shi Juan, who made the pipa sound like a flamenco instrument. The atmospheric score from the South Korean television series may not be familiar to regular Vancouver audiences, but was instantly recognizable by many in Monday’s Orpheum crowd. I wasn’t sure what to think of “Symphony No.40” (based on the molti allegro of Mozart’s symphony #40). It reminded me somewhat of “A Fifth of Beethoven” by Walter Murphy from the crazy disco era.

“The Girls” ended the scheduled concert with an almost mesmerising rendition of “Riverdance.” The appreciative applause was so exuberant, that the band returned to the stage to perform one of their best known tunes: “Freedom” – a tune that best showcase's the band's virtuosity.

I had only one complaint about the show – well, actually two – but they’re connected. I would have much preferred to listen to an organic live sound, rather than hear the instruments amped up and pushed a battery of loudspeakers. Also, the recorded rhythm track that was used to augment the live performance was, for me, superfluous. It was never more intrusive than as a percussion track on the band’s interpretation of Paul Desmond’s “Take Five.”