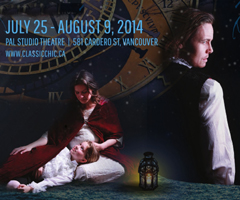 It was an ineresting experience seeing Shakespeare done with an all female cast. An audience member quipped, "I'm sure if this were an all-male cast, it wouldn't be as good". Indeed, this all-female cast of Classic Chic was well done. The women playing male roles delivered with masculinity. Corina Akeson (Leontes) looks like Michelle Pfeiffer in the programme photo but in the play has a starking resemblance to Johnny Depp.

I didn't quite go for the "Bohemian" look of Monice Peter (Polixenes) nor his son Florizel (Andrea Yu), but they acted the parts really well. I take my hat off to Janet Glassford (Autolycus) – she was excellent as the roguish peddler, vagabond, and pickpocket. The beautiful Alexis Kellum (Hermione) was perfectly cast as the melodramatic queen who was wrongly punished and who "resurrects" at the end of the play.

These are just a few comments about a few of the actors, but overall, the acting was superb, and accolades to Director Lisa Wolpe and her production staff for a fabulous must-see production which got a standing ovation on opening night.