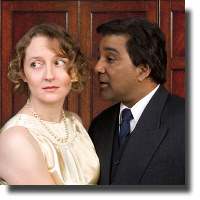 A sordid truth struts and frets her hour on the boards, but loses herself in the telling only to find herself in the relating. What I mean to say, is that although a tell may betray even a carefully played poker hand, everyone can relate to the human emotions that give rise to such a betrayal. Similar feelings are at play in Waste, a winning hand admirably dealt by the 'Smoking Man' himself, director William B. Davis.

From the opening scene, as the stage is set at Lady Julia's weekend party, banter is subtle, barbed, as rapid-fire and harmless as an exchange of artillery fire at close quarters. One must keep up, and I'm not just talking appearances. Amy O'Connell appears on the surface to be as close to an ingenue as this jaded crowd can get. Helen Martin plays Amy as able but not necessarily amiable, and she convincingly conveys her character's wilful nature by gestures and mannerisms that evince a calculating kind of worldly innocence blended with a penchant for romance. Ms. Martin also does an impressive job of portraying Amy's ice-hot passion for Cedric De Souza's Henry Trebell with equal parts insouciance and desire throughout their gradually unfolding tête à tête.

Mr. De Sousa, a consummate performing artist, shades the canvas of his character's responses with dark nuances from his sombre palette of moodiness and stippled stoicism, pausing now and again to highlight more impassioned speeches with the brighter hues of robust idealism. De Sousa paints a portrait of Harley Granville Barker's protagonist that is both so vital and so vivid that the finale is all the more lamentable and tragic.

Barker's experience as manager of the Royal Court Theatre and with writing numerous prefaces to Shakespeare's plays is perhaps nowhere as evident as in the careful plotting of this superb play. Although issues such as 'disestablishment' seem strangely archaic to contemporary audiences, everything about Waste, from the elegant and refined props Frances Herzer uses to embellish John Taylor's elaborately designed sets to the sophisticated Jenny Lang costume designs make this one of the best period pieces Andree Karas has produced for the United Players.

Years after he gained fame as the Smoking Man on the X-Files, the Barenaked Ladies alluded to William B. Davis in their catchy kitschy song One Week with the line "I hope the Smoking Man's in this one". Well folks, wild Bill is definitely in the details of Waste. There in the elaborate orchestration of the scandal-management summit, with its triangulation and intrigue. There in the delicious irony of a party bent on separating church and state that sees forgiveness as its salvation. There in the fully-drawn sanguinity so reminiscent of one of Christina Rossetti's women that Diana Sandberg evokes through her role as Henry's sister, Frances Trebell. There as each mood-enhancing tune plays between each shifting scene in this wonderfully performed play about how party politics can betray those it popularizes. The series that made William B. Davis famous had as its catch-phrase: "The Truth is Out There." There is a truth that struts and frets her hour upon the stage, but if you don't go to Waste, you'll never be able to spot the tell and see how you relate to what it relates.